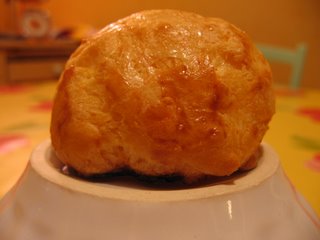 Had the priest who is baptising Camille, Pere Yves Frot, over for dinner last night. Franck thought it would be a nice gesture to thank him for accomodating us so nicely. When we told my parents (who were visiting for three weeks) that they would be dining with a real died-in-the-wool clergyman they blanched.

You see, we have never been a religious family. And as luck would have it the ministers / priests we have been exposed to in Victoria over the years have proved by and large to be a rather uncommendable lot. Amongst them were wife-beaters, fiery bible thumpers, addicted gamblers (and this one was a bishop who committed the spectacular faux-pas of betting and losing all of the diocese’s money on a not-so-blessed racehorse) , plus a scattering of your everyday holier-than-thou, judgemental types. No surprise, then, that Mom and Dad seemed a tad apprehensive about our approaching tete-a-tete with Pere Frot.

Putting aside the outrageous hypocrisy practised by the motley gang detailed above, there is also something else unnerving about being around clergymen. If you are not familiar with churchy things, it is rather like feeling as though you will be expected to perform a dance to which you have never learned the steps. What if you say something unintentionally (or intionally, I suppose, but we are talking about Canadians here) sacreligous? What if they are going to ask you to do something weird, like all hold each other’s hands and pray?

I tried to get across the notion that as far as I could see, Pere Frot wasn’t really that kind of priest. He had married Franck and I, baptised Charlotte, and had also accompanied Franck on a memorable calvados-fueled church trip to Normandy many years ago.

So the time of the dinner grew near, the lamb was rubbed with olive oil and herbes de provence and put in the oven, the gougeres were warm and in their basket, the wine glasses were put out, and Mom and Dad were looked shiftily at the front door from time to time, contemplating possible escape routes.

And then the Pere arrived. Larger than life, doling our excuses for his lateness, doing the rounds of kisses and hand shakes, and just basically acting like any other nice, gregarious dinner guest.

Everybody seemed relieved; that is, until we took our seats around the table and then Franck suddenly leapt up to tend to an urgent lamb-related issue in the kitchen, leaving us alone with the priest.

The gougeres were tantalisingly steaming from their baskets, and the little rounds of cut saucisson sec gleamed up at us, just begging top be eaten. However, I was suddenly overcome by panic. What was the protocol here? Could we just go ahead and eat? Or should we say grace? Or should we ask him to say grace? I could tell Mom and Dad were as unsure as I was, and they kept there hands obediently under the table. I, on the other hand, used mine to illustrate the nonstop rattle of words that flow out of my mouth, unchecked, whenever I am totally flummoxed. Finally, unable to stand it any longer, I made up some pretext and dashed into the kitchen where Franck was completely absorbed with basting the lamb.

“Get back in there!” I commanded.

“What?” he asked, patently annoyed to be bothered during this all-important basting juncture.

“But we need you! We have no idea what to do. Should we ask Pere Frot to say grace or can we just go ahead and eat?”

“You haven’t started eating yet?” he said, incredulous.

“Of course not! I need you to tell me what to do about this grace thing.” I was quite put out that Franck didn’t seem to be grasping the urgency of the situation.

“I don’t know,” he said, distractedly, refocusing on his lamb. “Just do whatever, but merde, get everybody eating.” Clearly, his Burgundian fear of being unhospitable far outweighed my ecumenical crisis.

So I reluctantly took my place at the table again, and observed with no small amount of agony that the situtaion had not become unblocked during my absence. My parents were still sitting demurely with their hand on their laps, and Pere Frot was smiling at the lot of us in a polite but increasingly frightened way. I resumed my non-stop monologue about something inconsequential and babbed on for a few minutes more, while debating what to do. Finally Pere Fort escaped, and rightly so, in to the kicthen to talk with Franck, whom he must have concluded by this point was the only sane person in the house.

Seconds later gales of laughter came from the direction of the kitchen.

Franck and Pere Fort shortly came back to the table together, still shaking with laughter.

“What?” I demanded icily.

“I told the Pere Frot about you guys all waiting for the prayer,” Franck said.

I sent my husband the traitor a very dirty look indeed.

Pere Frot took his seat. “And I said,” he continued the tale, still wheezing slightly from laughing so hard, “Good god no, let’s just eat.” 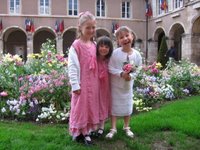 We went to an amazing wedding on Saturday evening – a wedding that could have only happened in Beaune.

The parents of Charlotte’s buddy Anne-Louise were getting married, and her mother, Marie-Joelle just happens to be the director of Human Resources at the Hospital / Hospices of Beaune. The wedding was all built around a “Beaune” themed – the invitations and menus were printed up exactly like labels from the much coveted wine sold at the famous Beaune wine auction on the thrid weekend of every November, and then there was the wine list itself…it contained no less than thirteen wines from “Les Hospices” and took up an entire page of the menu – enough to make oenophiles collapse in spasms of jealousy.

Each table had an appointed “caviste” with the all-important repsonsibility of keeping everyone’s glasses full of the appropriate wine for each of the wonderful courses being served – foie gras and fig compote for starters, for example. Hard job but someone has to do it!

And then there was the locale for the reception and dinner – none other than the “Bastion” of the Hotel-Dieu. This incredible medieval room is used every year for the prestigious closing dinner of the annual “Vente des Vins”, and for other gala events, but is otherwise closed off the the public. The vaulted room is actually inside one of the medieval fortifcations of the town, and is decorated with priceless tapestries dating back to the seventeenth and eighteenth centuries.

So it was in this awe-inspiring decor that we and the girls (who were thrilled to be sitting at the “children’s table” with its own separate menu and waiters, far away from the parents) wined and dined and danced until the wee hours of the morning.

As usual our life here in France is going along at breakneck speed. We just got back from a sun and sand and paellla filled week “vacation rental swapping” on the Spanish Coast. We were scrambling to catch up with work, laundry, and cleaning our house, which, not having been left in the tidiest of states, closely resembled a nuclear testing site.

In the midst of all this it dawned on us that although we had coordinated all the dates with the family members and planned a big celebration of Camille’s baptism on May 25th (no small feat) during my parents’ visit from Canada, we had somehow forgotten to find a priest to perform the ceremony.

This is actually our second attempt to have Camille’s baptism – we had planned a similar celebration when Camille was five months old and we were visiting France. Everything was organised down to the “dragets” – the little sugared almonds that are traditionally given away as party favours. The only problem was that the night before the appointed day Camille came down with terrible case of the measles.

So, following the protocal of the paroisse, three days ago Franck held his breath and crossed his fingers for good luck and called the priest directly responsible for our village. The priest asked Camille’s age and when Franck informed him that she was now four he poo’d poo’d the idea of baptising her at all. Apparently in his books four isn’t an appropriate age to be baptised – it’s far better to wait until the child is eight, for some random, unexplained reason. This phone call left me grumbling ominously about how the Catholic church was hardly in a position to start rejecting people interested in joining given their current demographic problems, mutter, mutter mutter…

Undaunted, Franck called Pere Frot, the priest who officiated our marriage and Charlotte’s baptism, and, who, incidentally, Franck accompanied on a Calvados-fueled church trip through Normandy several years ago.

Pere Frot was our first choice any way, so we were thrilled when he said that bien sur he could do it, and why didn’t we come down to Nuits-Saint-Georges, which is his paroisse, that very afternoon to discuss it further.

He has always proven himself to be a great priest – accomodating, inclusive, flexible (agreeing at the last minute to have our whole wedding ceremony translated blow-by-blow into English by my bilingual friend Emmy who had just arrived from Oxford) and down to earth. He obviously feels very strongly about his beliefs, but in a way that radiates outwards instead of excluding or judging others. It also doesn’t hurt that he has a certain Gerard Depardieu’esque appeal – more than one female guest at our wedding expressed curiosity about what was underneath his cassock.

So it looks as though Pere Frot has saved the day once again. We’re meeting with him again tonight to go over the details of the ceremony, and now our menu planning for Camille’s baptism on May 25th can begin in earnest.