Ellen and Joe Moncure, along with their 3 year old son Yates were guests at La Maison des Deux Clochers last year who have since become good friends. This Fall, they cooked up the idea to come back for a week at the end of January. Ellen contacted me about renting all three properties so that they could share their beloved Burgundy with Ellen’s mom, Joe’s mom and sister, and their very good friends Graham and Chesli and their two young children.

Immediately, I issued Ellen a stern warning relayed from Franck – January could be VERY cold…and icy…and snowy. Ellen, who is certainly no fusspot, riposted that they were used to being cold in their drafty old house in Brooklyn, so that it was no problem.

Franck continued to stress about the cold, but finally began to relax when the weather from December into January continued to be so unseasonably mild that the winemakers began to panic their vines would bud in the middle of the winter. 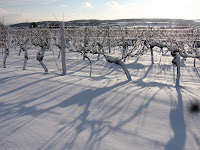 The day after the arrival of the the gang Franck and I went out for one of our after-lunch walks on Les Chaumes above our house. It was 14 degrees outside, and so balmy that I was warm enough in my T-shirt. We congratulated ourselves on the excellent weather our guests were having. Along the way we met two older ladies from the village and we began to chat with them about, of course, the weather.

When we commented on the fact that we were probably not going to have any winter to speak of, the lady with the cane shook her finger

This old dicton, or saying, basically means that the Saint Vincent is the french (or Burgundian, anyway) equivalent of Groundhog Day. If the next day dawned cold, the winter would hunker down and last some time longer; if it stayed mild, winter would be over.

The next morning, the morning of the real Saint Vincent, we woke up to temperatures that had plummeted to -7 degrees.

On Tuesday morning, we woke up to snow. It was pretty, for a while. We didn’t start to worry until things started to get really dodgy in the late afternoon. By the time we needed to leave to pick up the girls from school on Tuesday afternoon, the snow was coming down fast, we had to melt all the ice around the car doors to be able to unstick them.

When inched our way down to The Nationale 74, thinking we had gotten over the worst, only to find that the Nationale hadn’t been salted or cleared. We turned on the radio. Apparently, all the snow clearing equipment had been diverted to the autoroute which had actually been closed – an extremely rare occurrence – because conditions were so bad and deteriorating rapidly.

We managed to pick up the girls, go and do some much-needed grocery shopping in an eerily deserted E.Eleclerc, and then began the trek back up to our hills. The cars were literally inching along – and the autoroute was still closed. It took as an hour to get from Leclerc to the turn-off to Ladoix–Serrigny, a trip that usually takes about 6 minutes.

“I don’t think we’re going to make it,” Franck worried as we turned up the hill towards Magny. Silence descended over the car and we all wished for the tires to gain traction on the icy, snowy road. But just across from the entrance to the rock quarry the wheels on our hardy but very heavy Ford began to spin on the ice, and we began to slide backwards, towards the guard rail and the deep gully on the other side of it.

Franck very carefully swung the car around – no easy feat as he was doing it on what had become a sheet of ice – and headed back out to the Nationale with the hope of being able to get up the longer but slightly less steep slope to the Hautes-Cotes at Comblanchien.

It was downright eerie. There was so much snow that it was hard to make out where the road was, but when the whirling wind did briefly reveal a bit of the road, it was white and frozen. I’m still not quite sure how we managed, but we finally inched our way up to Villers-la-Faye and, even though it took us four tries to figure out just the right amount of velocity and slip-factor, got the car in the driveway.

“I just hope that everyone is safe in their gites,” Franck breathed as we closed the door behind us.

Right away I phoned around to see if everyone was accounted for, and was relieved to hear from Ellen and Joe’s friend Chelsi, who was staying with her husband and two young children at La Vieille Vigne that everyone was safely in their homes, except for Ellen and Joe and Yates, who as it happened would be arriving any moment for dinner.

Undoubtedly the road from Magny to Villers, where Ellen and Joe were staying at Les Deux Clochers, would be a mess, but I figured that even if they got stuck mid-way the two villages are so close together (less than 1km apart) that they would never be far away from either house and help. I asked Chelsi to give us a call when they arrived just to put our minds at ease, and then, much relieved, Franck and I and the girls sat down and ate.

As we were finishing up our dinner with some delicious Citeaux cheese we had picked up at the Monastery after Vesper’s that Sunday, it occurred to me that it was a bit odd that we hadn’t had a phone call yet. But we all know how that goes – you arrive somewhere, crack open a bottle of wine, start talking and laughing, and simply forget.

But by 9:00pm or so I still hadn’t heard anything, so I called Chelsi again.

“No, they haven’t arrived yet,” she said.

“We’re getting really worried, especially as Yates is with them, so my husband has just left to find them.” (And who says that true friendship is dead in this day and age? I was worried, but impressed nonetheless.)

“But,” I said. “Even if they got stuck between Magny and Villers, they should have been able to at least have walked to one place or the other by now. “

“How long ago did your husband leave?” I demanded.

“Just a few minutes ago.”

“Does he have a cell phone?”

“OK. Give me the number and I’ll call him right away, and tell him to stop wherever he is and wait for Franck.”

“Oh, thank God,” Chelsi said, unable to keep the relief out of her voice. Apparently she didn’t like the idea of Bruce being out there all alone in a blizzard, trying to find a needle in a haystack, any more than I did.

Lucky I reached Graham, Chelsi’s husband, on the first try. We arranged for him to stop at the pharmacy at the bottom of the hill in Ladoix–Serrigny (that was, if he could see the fluorescent green cross through the blinding snow!) and wait for Franck. He seemed rather pleased with my plan, which was understandable as he told me that on his way down from Magny to Ladoix–Serrigny he had to slip and slide past a bus and a car which had both gotten stuck, jack-knifed, in the middle of the road.

I hung up, and turned to Franck, who had clearly caught the gist of the conversation and was already gearing up for the expedition. In record time he assembled warm clothes, our down sleeping bags that we had bought for our trip to Nepal, chains for the tires, and some biscuits for Yates, who we figured was probably a little scared and hungry by now.

Once he left I quickly put the girls to bed and assumed my mantle, along with Chelsi, as the emergency search & rescue coordinator.

Chelsi was very good under pressure, despite the fact that she was left at home, snowbound with two young children and her husband gone out into the snowy wilderness of Burgundy. It reminded me of something out of Little House in the Prairie, except that Pa and Ma Ingalls weren’t lucky enough to have cell phones back then.

In the multitude of phone calls that ensued, it turned out that Ellen and family had left the apartment in Beaune at around 6:00pm, so the worry ramped up another level: they’d been out there for more than three hours.

I called Franck to see where they were at, and the road had gotten so bad that Franck and Graham had stopped to put Franck’s chains on, a process which involved much cursing at the blinding snow and the icy wind.

I hung up, and chewed my lip until the phone rang again. It was Ellen’s voice! Oh joy!

“Some person here has lent me their cell phone,” she said, sounding a bit stressed through the static, and the garbled french voices in the background.

They were all OK, but stuck – very stuck – in a ditch. Once I had gotten all the pertinent details from Ellen I asked her to put on the french man who had kindly lent her his cell phone. The darling man, from Magny, told me exactly where they were (just before the signs at the edge of the vineyards directing cars to either Villers or Magny), and agreed to stay with them. Actually, he , sounded rather thrilled about he prospect of rounding up some more men and having the chance to try to pull the van out of the ditch.

Once I hung up I hurriedly phoned Franck, delighted with the fact that I could now tell him exactly where to find Ellen and Joe and Yates, but he quickly put a damper on my enthusiasm. The roads were going from very bad to disastrous, apparently, and he was grim about the prospects of even being able to get to them.

In the end, Franck and Graham did manage the impossible, and they participated in a heroic attempt along with Joe and the anonymous saviour from Magny and another man or two that he had managed to flag down, to unstick the van but it was a no go.

Graham’s car also had to be abandoned, so in the end everyone piled into our Ford Mondeo (good old Yankee cars). Franck told me when he blew in the door that there were many moments were they were literally driving over snow drifts, and he was not even sure if they were on the road at all or not. We all gained a new appreciation for chains, as they somehow managed to make it back to La Vieille Vigne where Ellen and Joe and Yates had to camp out for the night.

The next day everyone the world was at a stand-still. The roads were still so icy and horrendous that schools were cancelled and nobody went anywhere in the morning. The winetasting we had planned had to be cancelled, and in the end we all gathered for lunch at our place where a few good bottles of Claire’s wine, along with a couple of quiches and salad, banished the previous night’s angst and turned the whole experience from an ordeal into an adventure and a damned good story.

And wouldn’t you know it, by the time Ellen and Joe left for a few days in Paris the snow had melted and it’s been mild ever since. I’m just waiting to bump into the two elderly ladies on one of our walks on Les Chaumes and ask them again about that dicton of theirs.