You heard it here first. Burgundy’s 2009 vintage is poised to be one of those fabulous vintages that stand out this century.

The ideal conditions started with the perfect weather for growing and ripening grapes throughout this year, and crescendoed in lovely dry weather for the harvest which meant that the gorgeous, sugary grapes were brought in, de-stemmed, and juiced with an unusually low incidence of mildew or rot. 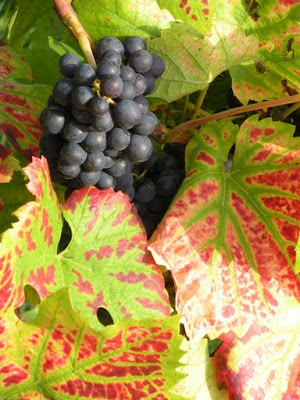 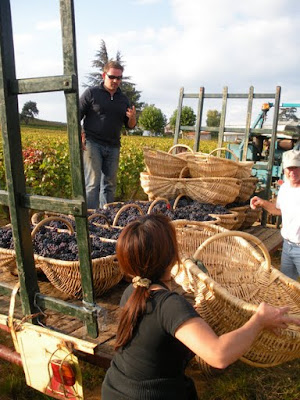 It was a particularly joyous vendanges in Burgundy this year; everyone involved felt like they were part of something truly wonderous. Many are saying that the 2009 vintage may even surpass the superlative 2005 vintage, which wine buyers can barely get their hands on anymore. It is sold out at most domaines.

Maybe it will even measure up to the sublime 1929 vintage – a few bottles of which savvy winemakers throughout Burgundy still hoard in their cellars. 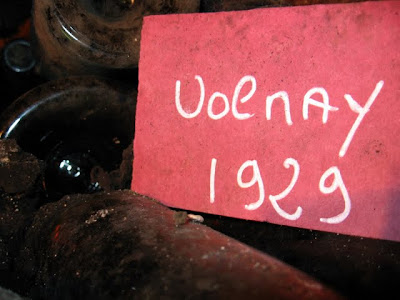 So if you are travelling to France over the next few years, jump at any opportunity to taste, buy, and hoard 2009 Burgundy reds and whites (don’t forget we rent out space in our newly renovated 13th Century wine cellar in Beaune for a mere 200 Euros per year – I’m working on getting a page about this online).

Also, if you are going to be around Beaune for the 3rd weekend in November take the opportunity to take part in the world-famous Hospices de Beaune winetasting and taste the 2009 vintage from the barrel before it is even released to the market!

We might be able to help you arrange this, just email me here. 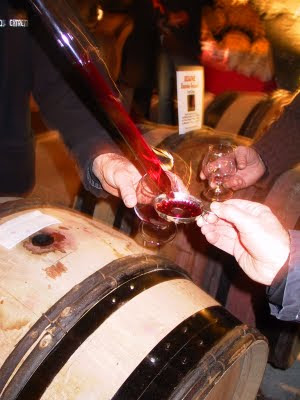 Because as any visitor can tell you, the heart of Beaune and its surrounding villages is its wine. The 2009 vintage is liquid proof that it’s beating strong. 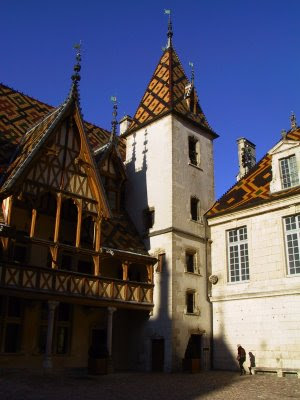 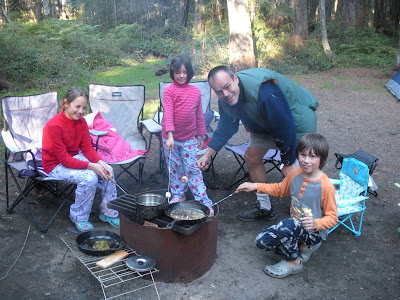 Maybe my French Husband can whip up a boeuf bourgignon or a coq au vin in a clin d’oeil, but I am proud to say I am the Queen of Roasted Marshmallows.

In the name of inter-cultural harmony I did condescend to let Franck in on a few trade secrets, but everyone on our weekend camping trip ultimately had to bow down to my marshmallow roasting supremacy.

What can I say? Years of experience…

Must go and find my Stay Puft crown. 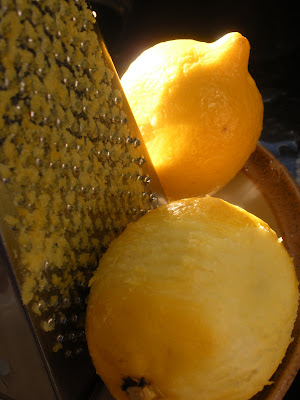 A few posts ago I mentioned my homemade recipe for Crème Fraiche which mentioned Lemon Tarts, and I promised to post the recipe for my fabulous French Lemon tarte.

This is one of those stalwart, life-saving recipes. It really isn’t that difficult, but gets absolutely rave reviews every time. The first time I tried it it was at my friend Charlotte’s house. She had made it for dessert one day when just her, Franck, and I were having lunch together. Between the three of us we ate almost the ENTIRE tarte.

Now, perhaps such gorging isn‘t a very Frenchitude thing to do, but this tarte is so much the quintessence of Frenchitudeness in its beautiful lemony simplicity, that you simply have to surrender to the pleasure of eating it.

Make it, and you too will understand the paradox. 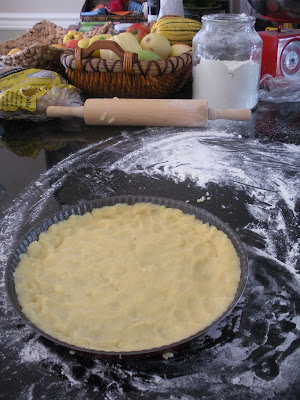 First you have to make the shortbread pastry:

-Mix all the ingredients up with “S” blade in food processor until it becomes a ball. Just for the record I am a HUGE fan of food-processor homemade pastry.

– Wrap it in Saran Wrap and flatten into disc shape. Let sit in fridge for an hour or more.

– When you are ready to make the tarte, roll out the pastry and then press in into a buttered and floured quiche pan. It is normal that the pastry is a bit crumbly and you have to sort of press it together like pieces of a puzzle. Poke it all over with fork after you have assembled it in the pan.

– Slide the pastry in the quiche pan into a 180 Celsius (360 Fahrenheit) degree oven for 10 minutes. You can use those bean thingies to keep your pastry from puffing up, but I never have them at hand and it turns out fine. 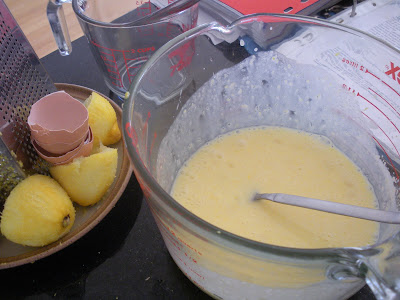 Now while your tart shell is cooking, here is how you mix up the lemony-lemon filling:

– In a saucepan boil the cream. Let it cool.

– Zest and juice the 2 lemons.

– In a bowl, mix together eggs, sugar, cooled cream, lemon zest, and 50 ml of the lemon juice.

– Pour this mixture on to your pastry (it’s normal that the mixture just barely covers the pastry), and leaving oven at the same temperature cook for an additional 15 minutes or until it doesn’t jiggle in the middle anymore.

– Put in fridge to cool. 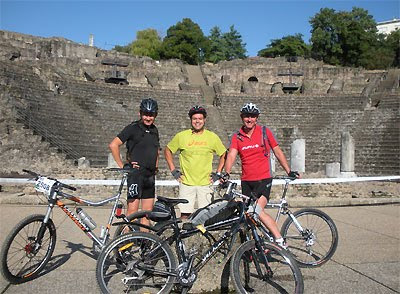 Yes, that’s my Very French Husband (otherwise known as “VFH”) in the middle in that hideous acid green running shirt that I have been scheming to “accidentally” misplace in the garbage bin for going on two years now. Must get around to that…

This photo was taken during a bike ride through the streets of Lyon including, as you can see, its gorgeously preserved Roman Amphitheatre.

If you are interested in joining Franck for his biking, running, eating & winetasting adventures in France have a look at the website for his Grape Trips.

The URL is not hard to remember, even for someone memory-challenged like me.