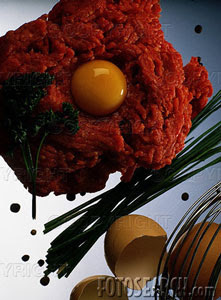 Franck pokes at my piece of beef with a spatula. “I can’t stand seeing you do this to a perfectly good piece of beef”

I take a poke at it with a fork – there are still some reddish juices flowing. “Do you want me to show you my monthly lab results?” I demand.

“Non. It just takes common sense to know that when they say cook your meat well they do not mean turn it into a piece of charcoal.”

I go find my “Pregnancy” folder anyway and dig out my latest lab results. I return to the kitchen and read out triumphantly. “Patient non-immunized against toxoplasmosis. Avoid all contact with cats. Wash all fruits and vegetables thoroughly. Cook all meat well, especially lamb, pork, and beef.“

Of course he doesn’t think I’m being reasonable. I’m married to a man who prefers his beef still chewing its cud. Over the past few months he has discovered that one of our favorite restaurants, La Ruelle in Dijon, serves up the most delectable steak tartare (raw beef, mixed with a raw egg and herbs) he has ever tasted. That’s all he orders there now.

But just as North Americans have a thing about taking Folic Acid during pregnancy (which like a good Canadian lass I did on my own accord until last month, at which time my bemused Obstetrician informed me there was absolutely no benefit in taking it after the first trimester) the french are all about monitoring for toxoplasmosis while pregnant.

Because I’ve never had it – probably because I have never been able to warm up to the idea of either a cat or steak tartares – I have to be tested for it every month during the glow-worm’s gestation.

I’m not entirely sure what happens if I was to get infected, but I get the general gist it is Not Good, which is why I insist on burnt steaks.

So imagine my surprise and delight when I receive a sheepish call from the doctor’s office yesterday morning.

“Chez le medecin. Remember those blood tests I had because of that gland that wouldn’t go down on my neck?”

“Well…turns out I have toxoplasmosis.”

Franck senses I’m not happy, and there is a rustle of movement over the phone line. “Here, I’m going to pass you to Docteur D.”

Docteur D. comes on the line to confirm that my husband has been infected with toxoplasmosis, and tells me what I already know – while harmless for a healthy adult, this is not something I want to catch during my pregnancy.

“Do you have any contact with cats?” he asks.

“Have you been eating much undercooked meat lately?”

Hah! “I haven’t, but Franck’s found a new resturant in Dijon and has been on a bit of a steak tartare kick lately.”

Docteur D., an overweight, chain smoking country doctor with an innate sense of human faiblesse laughs in understanding. “Ah well, they are good…that’s probably it, but to be on the safe side I’d like you to go and get a blood test right away.”

“Like this morning. I’m sending a prescription along with your husband, who says he will bring it to you right away.”

Franck arrives shortly after, and on the way to the lab I force him to admit that the toxoplasmosis / undercooked meat link perhaps isn’t just a figment of my overactive imagination, as he has argued during many meat-cooking episodes in the past.

Turns out I haven’t, thank goodness, been infected, probably because I had the good sense to avoid the tartares and the moo-ing steaks.

“So are you going to cut out the raw meat now?” I ask Franck, after being drained of several vials of blood.

He looks shocked. “Of course not! Docteur. D. says that now I’ve been infected I’ll develop an immunity and can’t catch it again, so to go ahead and enjoy.”

Of course he did. This is France, after all.