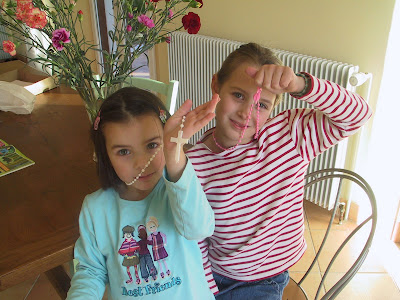 I will continue my “Name Game” Post on Monday but seeing as we are approaching Sunday here in France, I thought I’d take up a religious topic.
I have long thought that the Catholic church has a serious public relations problem. Its antiquated attitude towards thinks like birth control, Heaven and Hell, and punishing (or rather NOT punishing) pedophile priests has not exactly inspired new recruits to hustle off to Sunday Mass.
However, they at least have found one extremely effective strategy in the demographic category of girls aged 7-10; doling out cheap plastic pink jewellery.
At lunchtime at the girls’ school Saint-Coeur (translation “Sacred Heart” – you guessed it, it is not a Muslim institution) the students from Grade 1 (CP) onwards are invited to the Chapel after lunch where they are taught how to do useful things like say their Hail Maries and avoid the Diable.
Charlotte goes because they hand out plastic rosaries which she thinks are necklaces. Before the vacation she received a white one, but as she lost that in the constant flow of flotsam and jetsam that is their bedroom she was given a NEW one this week, and better yet it was PINK!!!!!!!!!!!
After getting an eyeful of Charlotte’s new accoutrement you can bet that Camille will be hurrying her little self to the Chapel next year as soon as she is able to get her pink plastic rosary.
But in the meantime Charlotte gave Camille her old one once she found it (a very Christian act, natch), has not taken off her pink one since she was bequeathed it, and is constantly murmuring Hail Maries and Ava Marias under her breath. The Catholic church finally got something right. 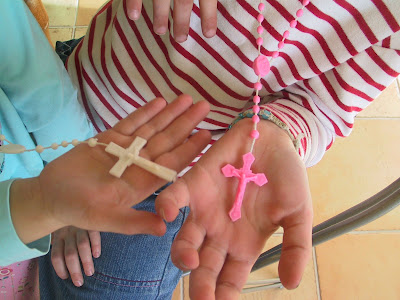