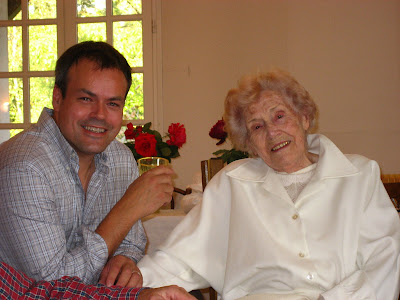 It has been a very emotionally charged few days for my family here in Burgundy. Just as I am rather ineffectually trying to prepare myself and my family for our new baby’s arrival on Wednesday, Franck’s dearly loved and indomitable grandmother, known to everyone as “La Mémé” died suddenly on Friday night

I suppose it seems a bit absurd to say that a 96 year old (almost 97) woman has passed away “suddenly”, but “La Mémé” was one of those people imbued with such a strong will and remarkable personality that you somehow believe they are immortal.

Besides, we had all believed her near death many times over the past fifteen years, particularly three years ago when she suffered a significant heart attack and the next morning the hospital phoned the family to warn them the end was near. They all rushed to her bedside, bringing clothes they had picked for her to wear in the coffin. As they converged in the hospital hallway, they took a moment to discuss funeral plans and to decide who should go in first to say their adieus.

Franck’s mother Michele was elected the first person to go in. She opened the door to the hospital room, taking a deep breath to brace herself and fighting back tears.

She found La Mémé sitting up in bed, nicely primped and with her hair newly styled, polishing off a hearty breakfast. She promptly lit into Michele that they had taken too long to come and visit her after what had been “a bit of a bad night”.

For years it went on like that – La Mémé’s health failed her often, but her iron will always made her rise up like a Pheonix from the ashes.

Even this time she fought until the end – Franck thinks strongly motivated to see her 18th great-grandchild come into the world this Wednesday – but her body gave out on her and she quickly slipped away surrounded by family, including her beloved Franck.

Needless to say there have been a lot of tears shed over the past 48 hours, and there will surely be many more tomorrow when her funeral is held in Beaune, and afterwards her burial on top of the Mont Saint Victor here in Villers-la-Faye.

Birth and death have this in common; I don’t think that us humans can ever feel ready for either of them.