***Was going to post this yesterday, as promised, but Blogger decided it wouldn’t accept photos for some tempermental reason, and its spell check STILL isn’t working, so please excuse spelling mistakes. You know. Sleep Deprivation…well, OK, also the fact that I am a terrible speller… ***

Last night was our first truly heinous night with Clémentine. She had a bad case of the sniffles so every time we tried to lay her out horizontal to sleep she would get all stuffed up and cry. I probably enjoyed a grand total of two hours of broken sleep, which has left me with the attention span and brain capacity of a gnat. However, I vaguely remember promising posting something about flower pots, so here goes…

Franck befriends people all the time, and over the past year he has become buddies with a man who shall remain nameless, as we don’t want him to get in trouble with his boss, who has been working on our street. Luckily for us, this mystery man also happens to be an expert on renovating wine cellars, as he has renovated some truly spectacular ones himself in places such as castles in Champagne and massive chateaux in Bordeaux.

In the strange fortuitous way things seem to work here in France, their friendship has evolved to the point where mystery man has named himself de facto volunteer general contractor on our cellar project. He doesn’t want to get paid (god knows, we have offered), he just likes seeing a cellar renovated the right way, and I guess he enjoys working with Franck.

He does things like spends three hours power washing the entire cellar with his own power washer, because that is the way it should be done. All he would let Franck do to thank him is take him out to lunch. Anyway, suffice to say that he is a miracle worker for us, and if our cellar turns out as lovely as I think it will, the credit should largely go to him. But it can’t, because his identity must remain a mystery. Zut alors.

During one of their many long conversations Franck and mystery man concocted the idea of a tasting table, as our cellar is not only going to be used for storing wine for ourselves, our families, and our clients, but also for hosting tastings whenever we are able to swing it. In my opinion wine never tastes as good as it does when you are tasting it in a real wine cellar, similar to how hot-dogs never tasted as good at home as they did at school in Canada during Hot Dog day.

Our mystery friend has more than a few tasting tables under his belt, and rather then pay for an expensive stone base, he suggested using two concrete flower pots filled and glued together with concrete. And although I was very skeptical when Franck told me the plan, I was amazed how good the base looked when it was all said and done; 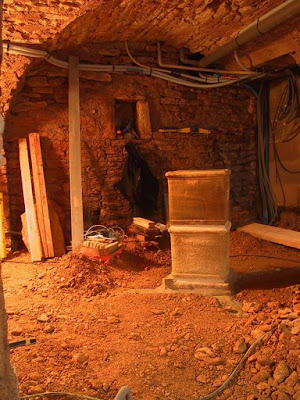 Looks like a real stone base, doesn’t it? Except that it costs about a twentieth of what a real stone base would cost.
Next step was going to the stone quarry to pick out a table top. Franck, mystery helper, and my Dad all hustled off to the quarry that’s in the village of Chaux right beside us in Villers-la-Faye.

Men being men they of course picked out what must have been the most imposing, heaviest table top in the place. Here is the beast in the back of the truck; 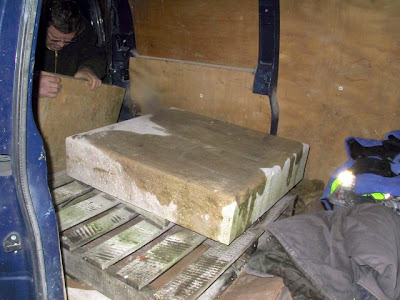 My Dad figures it weighs about 1000 pounds. Seriously. So now the problem is, how do mystery man, Franck, and my Dad who has a seriously bum back, get the huge slab of stone out of the back of mystery man’s truck and down into the cellar?