Anyway, back to how to get the 1000 pound stone table top (otherwise known as “The Beast”) from the back of Mystery Man’s truck down the steep stone stairs and into the cellar to finish off our tasting table.

This, folks, is where Franck’s galvanizing personality comes in. When I look at the photos of PROJECT TABLETOP my first reaction is, who are these guys Franck is bossing around? 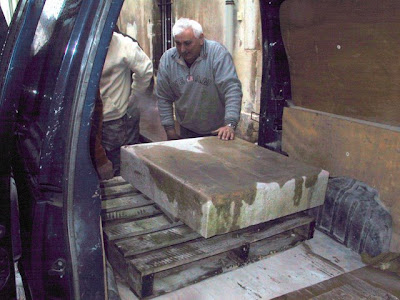 For instance, take this senior citizen who looks like he is about to have a coronary as he considers the prospect of helping take The Beast out of the back of the truck. I’ve never seen him before in my life. 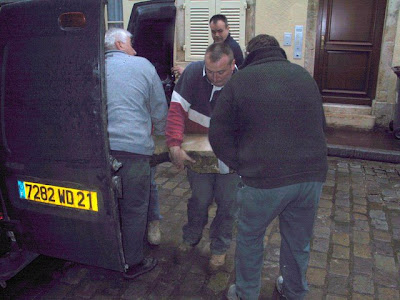 Same goes for the guy in the striped Rugby shirt and the one with his back turned to the camera; I don’t know either of them from Job. The photos show that Franck managed to round up at least six men to help, and as far as I can tell, only three (the stonemason, the mystery man, and Franck) have a reason to be there.

However, I have lived long enough with Franck not to put it past him to rope in innocent bystanders. I strongly suspect that the other three men were probably taking a nice stroll down the rue Rousseau Deslandes, perhaps whistling in the wind or counting their centimes to see if they had enough to buy a baguette at the wonderful boulangerie at the end of our street, when they were unwittingly enlisted into PROJECT TABLETOP. 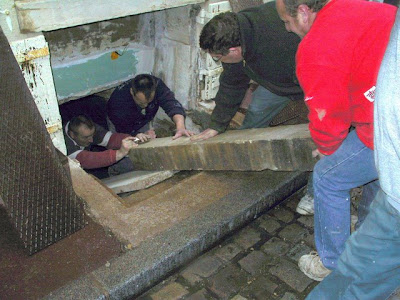 The lucky ones got to stay up top while the stone slab was slid down wooden planks into the cellar. And oh looky here! Franck has also talked his team into sliding down the extra stair step (needed after the excavation) while he was at it. I sometimes wonder if my dear husband didn’t invent the phrase “kill two birds with one stone” or perhaps more aptly “kill two innocent bystanders with one seriously heavy stone step”, but I digress…

Watch out below! Here comes the table top, and oui, a 1000 pound slab of stone is easily big enough to crush a man. Wanna bet that white haired guy is thinking I should have just eaten that stale bit of baguette I had at home… 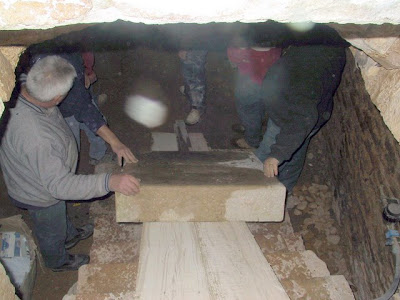 And PROJECT TABLETOP is not finished yet. The Beast still has to be carried a few more metres over to the fabulous flower-pot table base. 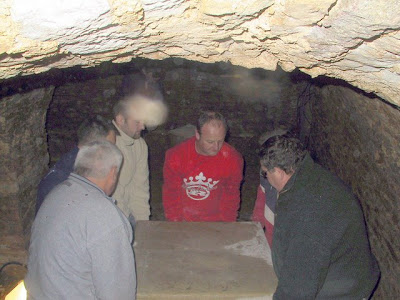 How do you say “hernia” in French? 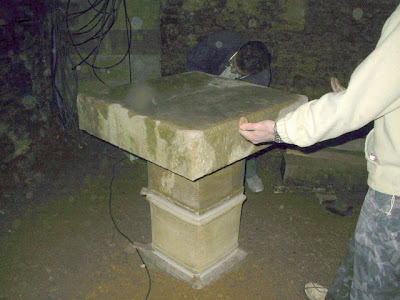 And move it just a leeeettttle bit this way. I can’t tell who this guy is from his shirt sleeves, but I’d wager good money that he wasn’t particularly popular at this juncture.

Because of his bad back my Dad was the official photographer of PROJECT TABLETOP. I haven’t asked him but I am thinking it must be sweat from all these manly men that makes those blurry spots on the pictures. 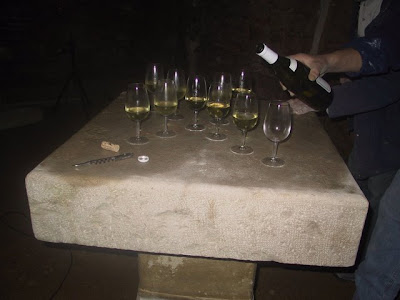 Ahhhhhhh…enfin! Finally the tasting table can be baptized. The innocent bystanders, relieved to have escaped unscathed except for a few sore muscles, may be starting to think, maybe I still don’t have my fresh baguette for lunch, but I wasn’t crushed and a fine glass of wine does make up for quite a bit… 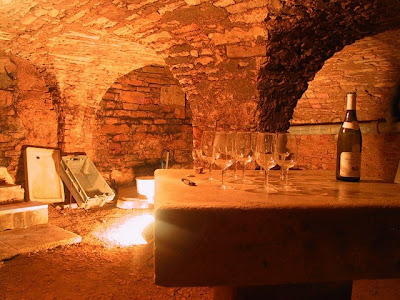 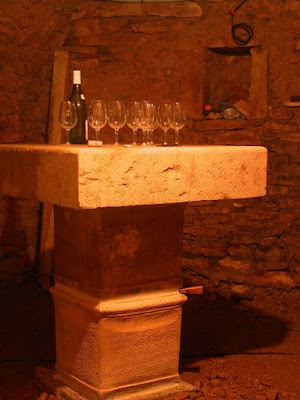 Besides, there’s something to be said for being involved in great artistic endeavors, a bit like the slaves felt as they laboured on the Pyramids in Egypt. You know, posterity and all that. And did I mention the good wine? 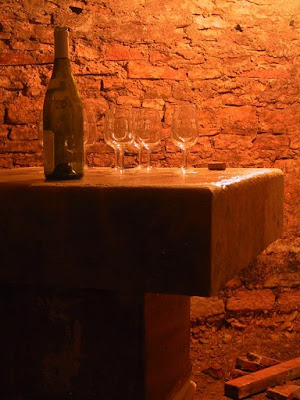 But sacré bleu, that was one heavy piece of stone…