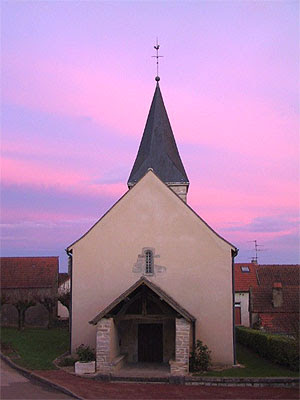 La Maison des Deux Clochers was our first house in Burgundy, so this is where I’ll start my antique tour.

A bit of background: we bought La Maison des Deux Clochers nine years ago. At the time I had just completed a grueling two year law degree at Oxford and was planning on continuing on to the BCL Master’s Program. Not, I am embarrassed to say, driven by any great passion for justice like so many great lawyers, but because I had no idea what else to do.

When the post-exam stress finally dissipated, however, I became aware of a wrinkle in my plan; I hated law. It dawned on me that if I actually became a lawyer I might indeed earn a lot of money, but I would also be committing a slow and painful hara–kiri of my soul.

So I did what has since become my modus operandi; when in doubt purchase real estate.

I happened to have a small inheritance from my grandfather, just about enough to buy a dog shed in my hometown of Victoria BC.

However, it turned out to be just enough to put a down payment on a little village house in Burgundy at a time when prices were still very, very cheap. Franck and I figured we’d always want a place to stay when we came back to Burgundy to visit his family and, like I said, I had no idea what the heck I was going to do next. I was in desperate need of a project.

And La Maison des Deux Clochers was definitely a Project with a capital “P”. The house was in truly dire shape when we visited it the first time, but there were a few things that I nevertheless fell in love with;

– The fact that the house was built in 1789, Year of the Revolution. Had to be an omen…
– The fabulous view out on to the village church, which dates back to Roman times
– The old cement floor tiles with their funky star and flower patterns
– Its crooked walls.
– Last but not least, this gorgeous wooden front door with the metalwork flower design and insanely complicated and fragile lock mechanisms. 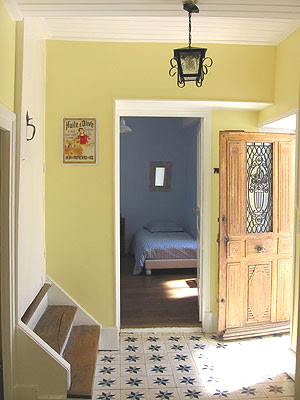 Now I suppose if you want to get technical about it this shouldn’t really be on the tour as it isn’t an antique we purchased (it came with the house). However, I can safely say that it is an antique I have fought for time and time again. It turns out that old doors, while very pretty, are also rather drafty. Many people (*ahem* Franck in collusion with the heating specialist) have argued that we should replace it with a new, hermetically sealed front door.

So that’s where this tour will start, with this door that I still love and which I will continue to fight for.

On to the bedrooms!

First we’ll start with the green bedroom with the queen-sized bed that looks out onto the church. Just an aside, I initially got a lot of grief for choosing this pale, crisp apple green paint colour.

Franck protested that it “tickled his brain” and my father-in-law diplomatically assured me as I was frantically painting my final layer that “maybe the room won’t look quite as green with furniture in it”. Turns out Franck fell in love with the colour and to this day still wants to paint everything apple green. And as you will see below, the room does look less green with furniture it in.

We bought this armoire eight years ago at one of our favorite antique places just outside of Dijon. I loved, and still do, the simplicity of its lines. At the same place we also picked up these two chairs, and you’ll notice that the one on the left is rather a funny shape; that’s because it’s a prayer chair from a church – low to the ground for ease of kneeling with a flat part on top so that the person sitting in the prayer chair behind this one can rest their bibles. 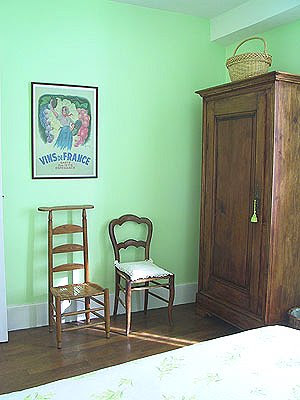 Next is the blue bedroom with the twin beds. Here you’ll find the twin sister to the armoire in the green bedroom, plus a neat wooden chair that we found in the attic of La Maison des Deux Clochers with a weaved straw seat. It was a hideous rust colour so I stripped it and painted it white.

Note how all my armoires have those cool little colour-coordinated tassels on the keys. As anyone who has ever stayed in one of our rentals quickly discovers, I have a bit of a thing for these tassels and believe one can never have too many. 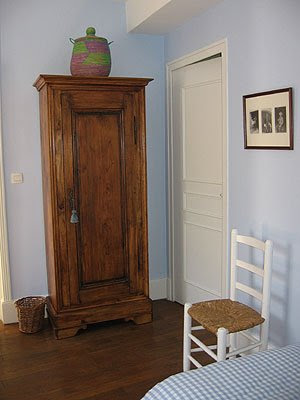 Next is the kitchen, which includes a kitchen buffet which we bought from the owners of the house along with lots of other furniture.

However, Clémentine is declaring rather stridently that she is hungry so the story of how we negotiated the purchase of several of the owner’s antiques over a bottle of cassis must wait until tomorrow.