If we just turn to the right from where the previous photos of the living room were taken, things start to get downright Gothic; 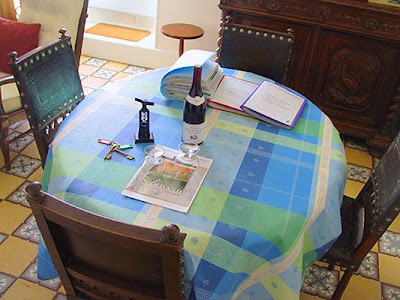 Check out these wood and embossed leather chairs that are decorated with big metal studs. They always look to me like something plucked out of a medieval torture chamber.

They go with the foot of the dining room table which is sadly covered up in my photo with the table cloth. This is a shame, because the table base is arresting to put it mildly; it is consists of a bunch of scary carved animal heads.

I definitely wasn’t too hot on the dining room table and chairs when we bought the house, and would have been delighted if one of the seller’s children had taken them. But I figured if I covered up the table base with the table cloth I could live with them.

This piece of furniture, however, had to go (imagine drum roll here); 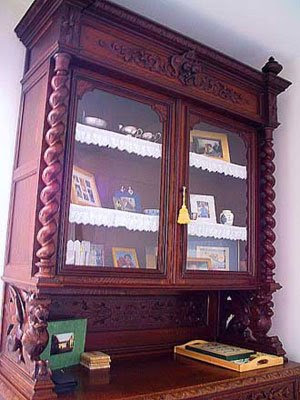 The humongous living room buffet that goes with the table and which couldn’t be covered up with a tablecloth. As you can see, it is a singular piece of furniture that deserves a drum roll.

This behemoth was my personal Waterloo. I loathed it at first sight. It was dark and had scary flying dragons with sharp teeth carved into it (see photo above) and birds of prey carved into the bottom doors (see below). It gave me nightmares.

The fact that the seller’s children offered to sell us the furniture under the shadow of this buffet is no coincidence in my mind. It is frightening, even more so when you consider what moving it would entail. 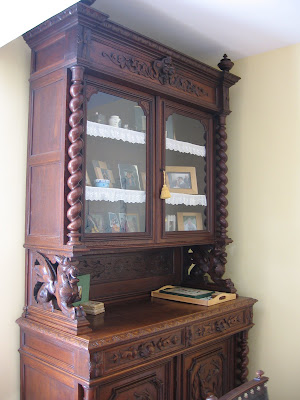 My intentions in regards to this buffet were crystal clear; I was going to take it to the antique dealer as soon as possible, sell it, then buy myself a french farmhouse piece with nice, clean lines to take its place.

However, for the many of you who have stayed at La Maison des Deux Clochers over the past nine years may have noticed, it is still there.

This is because a funny thing happened during those four months when Franck and I camped in the house and renovated night and day – the behemoth started to grow on me.

She would have been gutted if we had replaced it with some simple farmhouse armoire, the likes of which could be found in her house growing up, a place where there was a lot of love, but always too much work and too little money.

Despite the fact that it had ended up being ours as a complete fluke, for Mémé this buffet symbolised that her grandson Franck had Arrived in the world.

Secondly, our friend Alain who helped us do many of the renos on the house, and who happens to be an antique expert gave us some background on the piece. According to him, it dates back to the mid 18th Century and is made from pear and some other rare kind of wood that I can’t remember now. It is hand carved and all assembled with wooden pegs like a jigsaw puzzle – there is not a single nail in the whole piece. Alain also pointed out the tiny bubbles in the glass panes on the upper section. The glass was blown and hand-pulled. Alain, like Mémé, thought it was an exceptional piece. Someone had gone to great lengths to make it, and to make it well.

Thirdly and most importantly, taking it to the antique store would require moving it, bringing us full circle back to the lumbago argument.

So for the last nine years this buffet has continued to reign supreme in the living room of La Maison des Deux Clochers, just like it did for I don’t know how many years before we bought the house. I know from talking to guests over the years that it has its fans and its detractors, but funnily enough it has actually become one of my favorite pieces of furniture.

I love it in the same way I love Neil Diamond. The quality is there, and it is so unashamedly true to itself that it comes full circle and become attractive in its unique kitschy way.