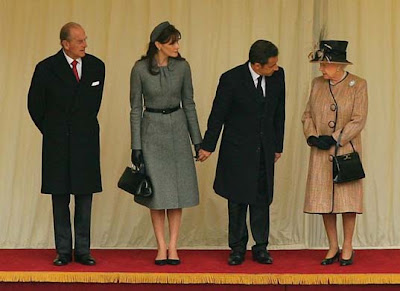 Check out the recent photos of the Sarkozy’s well-publicised trip to Great Britain.
http://www.hellomagazine.com/photo-galleries-nonews.html?imagen=/royalty/2008/03/27/sarkozy-uk-gallery/imgs/sarkozy-uk-1a.jpg
Carla has been dubbed “Carla Jackie Bruni–Sarkozy” by the French press for her not very subtle “Jackie O” sartorial choices, which include the questionable use of pillbox hats. Frankly I find her clothes really blah – the French must never relinquish their glamour in my opinion.

I’ll bet the British public, not to mention that famed womanizer Prince Philip, were rather disappointed after being treated to, thanks to those salacious British tabloids, photos of Carla in all her naked glory earlier in the week.

She also looks to me like she could be pregnant.
In France, Sarkozy does a good job of avoiding being filmed or photographed on a level surface with other people. This is because, as you can see above, he is shorter than most of them.

We had dinner last week with a friend of a friend who is a member of Sarkozy’s press corps and of course I had to ask a whole bunch of totally inappropriate questions. Apparently Sarkozy only measures about 5’4 in socks and never leaves the house without four centimetre high lifts.

And as for Carla “Jackie” Bruni–Sarkozy’s pregnancy, it turns out I may not be that far off the mark after all.