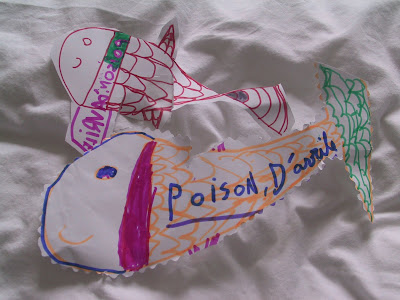 Don’t bother sending me birth control documentation, as I’m not pregnant, not even a tiny bit. This is a rather good thing as Clem is not sleeping through the night yet and I believe a fourth C-section would be pretty dicey business.

More importantly though, did you fall for it?

And as for Carla Bruni–Sarkozy…I really don’t know the truth on that one, but I hear rumblings that I may not be that far off base after all. Time will tell.

And for the benefit of my little sister Jayne (I let my sisters in on the joke, as they would have killed me otherwise) who wrote me in an email yesterday, “Don’t you mean “fish on the back”? My new friend Emilie (who is from Paris) was trying to explain to me that in France you put a fish on someone’s back for April Fool’s. Or something like that. It was the end of a long day I was confused…..”.

It’s true Jayne. Here in France April 1st is celebrated not by making outlandishly untrue claims such as yours truly, but by making paper fishes and sticking them on people’s backs without them noticing, hence the expression “poisson d’avril“.

The photo above is of two poissons that Charlotte made and stuck on my back this morning. The “without them noticing” part wasn’t exactly a roaring success as she not very subtly instructed me to “look somewhere else” as she affixed them to my jacket. However, being a mother I of course pretended to be blissfully unaware and wore them around for several hours, much to Charlotte and Camille’s overt giggling.

And for the benefit of Jayne and those history-buffs among you here is the best version I could find of the French “poisson d’avril” tradition;

In 1564, the King Charles IX decided the new year would commence on January 1st rather than April 1st as had been the case up until then. This, of course, moved the date of the traditional celebrations and present exchanges that typically marked the start of a new year.
Many French weren’t to chuffed about the King’s unilateral declaration (do I hear the seeds of Revolution being sown?) and to perpetuate doubt about the real start of the new year they – yet again with that endearing knack for shit disturbing – persisted in exchanging gifts on April 1st. These gifts quickly became farcical, because as we all know the French like nothing better than subversive humour.
The gifts were often food items as IPODs and Nintendo DSs were hard to come by in the Middle Ages. The beginning of April coincides with the end of Lent, so fish was usually much more easy to come by than meat. Throughout the 16th Century those gifts of real fish became gifts of fake fish to trick their neighbours. Ha Ha. Gotta love those medieval French pranksters.
Et Voilà! You’ve learned your new thing for today.
No joke.