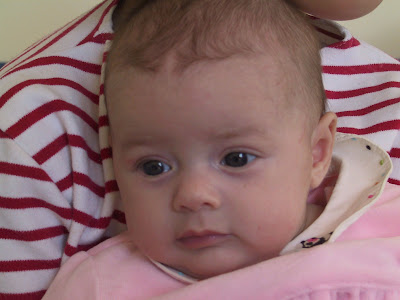 My posts have been a bit less frequent this week due to the fact that Franck’s computer has “rendu l’âme” (equivalent to “given up the ghost”) and every time I have Clem down for a nap and want to use mine he is on it. The gall. There is nothing that makes me as fractious and twitchy as having to share my computer.
It also means I haven’t been able to continue writing my “Antique Tour” posts as planned. Boo hiss.
However, we have a new computer for him arriving from Canada this weekend, so we can now see the light at the end of the computer-sharing tunnel.
And in the meantime I am going to post some pieces of writing that I have been putting down for Clem so that one day she can read about how she came to be, and how she narrowly missed NOT coming to be, seeing as her mother was all geared up to go and spend a year in Belgium rather than in France…
**********

If I was to go all the way back to the very beginning, I guess you could argue that my French pregnancy really started with the fifteen minutes I spent in a stuffy Canadian hotel room with five elderly Rotarians.

They were all men, they all had a file on me in front of them, and they were all peppering me with questions. This was it – the panel interview at the annual District Rotary Conference – otherwise known as the final hurdle before being sent off to Belgium for a year as a Rotary Youth Scholar.

I’d been duly informed by last year’s students, known as “The Incoming’s”, that this interview was somewhat of a formality. The truly inappropriate candidates should have been weeded out already, so unless I made a huge debacle of it I basically had my exchange to Belgium in the bag.

I remember pretty much everything about that moment when my life swung on its axis, like the fact that all the men were wearing polyester pants. I was the last interview of the day and the hotel room was stuffy, probably more from the sweat of all the candidates who had been grilled before me than the unseasonably warm Spring weather.

I reflected that polyester, which I knew from working at a women’s clothing store all through high school didn’t breathe, would be getting rather itchy by now. The Rotarians had scrounged up a fan from the hotel staff, but it was old and noisy and didn’t seem to be cooling things down much. There was a lot of squirming in chairs.

They had begun with the easy stuff – hobbies, my academic record, what I had enjoyed about the Rotary conference thusfar – but then they began to throw the hard balls.

“So what were your motivations for wanting to be a Rotary Youth Scholar?” A bespectacled Polyester Pant wiped his brow.

The truth ran fleetingly through my mind; finding a way to get to Europe, where I could drink lots of wine and fall in love with a European man. But this isn’t what I told the Polyester Pants. I was a child who had been introduced to Dale Carnegie’s “How to Win Friends and Influence People” at age 9, so I did what I had been taught to do; told the Rotarians exactly what I knew they wanted to hear.

“I have always been interested in other cultures,” I began my prepared speech with judiciously calibrated enthusiasm. “I would just love the opportunity to go to a foreign country and learn everything I can about a different way of living. Also, I have always liked meeting new people. I am very proud of being a Canadian I would relish the opportunity to educate them about Canada.”

They Polyester Pants bobbed their heads, seemingly quite satisfied with my answer, or perhaps nodding off to sleep. As for me, my thoughts meandered over to the subject of European men again. I was sure that they had to be more promising than the boys in my high school, who across the board seemed to display a shocking lack of appreciation for the voluptuous, intellectual type of girl; in other words, me.