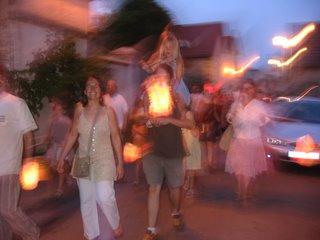 We had a welcome break from the apartment work. NOBODY works in France on July 14th. Well…I suppose they still need to have a few doctors and nurses around to stitch back the fingers that have been blown off from the firecrackers (petards), but that’s about it.

The Bastille Day festivities spanned two days. First there was the “retraite aux flambeaux” on the evening of July 13th. All the kids (and more than a few of the adults) picked up a coloured lantern at the salle des fetes in Villers-la-Faye, and then we all walked in a motley, lighted procession towards the little chapel between Magny and Villers (which was, incidentally, built after WWII to thank the Virgin Mary for sparing the two villages). There, we met up with a similarly lantern-bedecked contingent from Magny.

We all paraded through the streets of Magny to the sports field, where the village put on a fabulous fireworks display to music. After, there was a festive “Ball” on the tennis court, complete with Merguez in baguettes just off the BBQ, accordion music, and cups of warm beer.

On the 14th we all got up rather late and then trundled down the road with our coolers full of plates, cutlery, and bottles of water back to the salle des fetes to partake in a huge lunch outside under a tent.

While we ate we (170 villagers in total) were entertained by the village kids setting off “petards”, something very noisy and at times extremely annoying that I think would have made their revolutionary ancestors proud.

But they were finally outdone by one of their elders – our neighbour Victor (same age as Franck) spent about an hour and a half in the blazing sun setting up a chain of 100 or more petards that, once he set the first one off, all went off one after the other in a huge petard concert that Victor and the children seemed particularly enthralled by.

After the four hours of eating and drinking chilled rose wine, the games began. The highlight of the day was undoubtedly when Franck won the trophy for the village champion of “les quilles” – a game sort of like vertical bowling where you have to knock down three wooden pins all stacked behind each other with these very beat-up looking wooden balls. The girls were enamored with their father’s garish silver and shiny blue trophy, and it has held a place of honour on our mantel every since.

And then on the 15th it was back to work, and back to solving the head-scratching dilemma of just HOW to get our chic leather couch into the living room. We managed to squeeze the three antique armoires through the hallway, inch by inch, but the couch remains recalcitrant.

Luckily deliverance arrived came in the form of Georges, the darling general contractor working on the jaw dropping renovation of a beautiful old wine domaine just across the street from Le Relais du Vieux Beaune. The property was just bought last year by a Baron who also owns a huge wine company (Regnard) and has so much money to throw around that he employs all his tradesmen, including Georges, as salaried employees – no small commitment in France.

Georges has a house and family in Brittany, but lives in the building across the street while he is working in Beaune during the week. Franck had started to chat with him on a regular basis, but their “amitie” was inadvertently cemented last week when Georges had an on-the-job accident with a circular saw.

Despite the huge gash in his upper thigh he somehow managed to make his way to the Emergency ward in Beaune where he lunged through the door, clutching at the bloody rag he’d fashioned into a makeshift tourniquet and shouting “MEULEUSE!” (the word for a circular saw in French – now you’ve learned your new thing for the day). The kindly and competent nurse who got him on to a stretcher ASAP and sewed up the gape with 18 stitches while keeping him distracted by asking him questions about his home in Brittany was no other than my sister-in-law Stephanie. Georges was, as most of us would be, very grateful. The upshot of this was that Franck shared our couch dilemma with him, and the two of them have concocted The Plan which involves hoisting the beast through the second story window.

Time: Friday evening at 5:00, after the Municipal Police of Beaune have all toddled off for the weekend, or so Georges figures.

Place: rue Rousseau Deslandes, the street between our apartment and George’s workplace and temporary abode.

Equipment: A ladder, several thick cords of rope, and several pulley things, whose use is still an utter mystery to me

Team: My Franck, Georges, and the Other Franck (our cherished drywall / plasterer Franck, who always seems to be around to help us pull us out of this kind of predicament), and Me.

My Mission: I have been informed that I am expected to figure out a method to hold off the multitude of irate French drivers on the street while the other team members perform their magic.

To be honest, I’d rather not; but then that would be cowardly of me. Besides, it was I who picked out the blinking couch in the first place. So it’s my mission, and I guess I have to accept it.