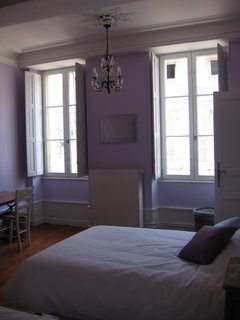 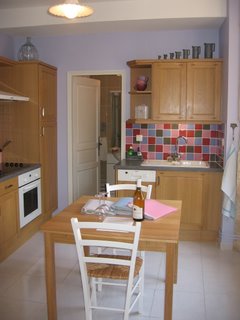 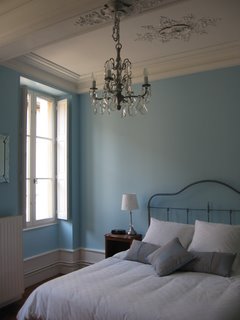 Exhausted but satisfied, we are ALMOST finished readying our latest vacation rental, Le Relais du Vieux Beaune, for our first guests The Zahlers who are arriving from Israel on Saturday.

It’s truly amazing how time-consuming the finishing touches and last minute troubleshooting can be. Even now, Franck is down in Beaune kicking up a stink at the France Telecom office – the phone line was booked to be connected as of July 17th. As of this morning it still wasn’t done. There’s also a page that I forgot to insert when I was doing up the info. binders, and we seem to have misplaced the instruction manual for the microwave…and so on and so forth. It really doesn’t stop until the first guests actually arrive, and even then there are suggestions that need to be taken into account, appliances that decide not to cooperate, and last minute bits of furniture to be added to our “search” list.

And I don’t want anyone to be under the false impression that it is a smooth process that we just glide through like a couple of swans. The past week has been insane. Even after the the couch was catapulted through the window, we had to do constant juggling trying to find childcare while we dashed about like farts in a mitt (and yes, as everyone in my family knows, I stole that wonderfully evocative expression directly from my aunt Sharon) trying to get everything bought, cleaned, and set up in a very compressed period of time.

To compound matters the recent heat wave in Europe has, over the past four days, sent temperatures skyrocketing to as high as 39 degrees. Needless to say, we are all feeling tired and extremely grumpy.

This is the third house we have done over here in France now and it is becoming increasingly clear to me that clashes are a common, perhaps even requisite, part of the creative process. Over the past forty-eight hours Franck, I, Charlotte, and Camille had grown increasingly tired and fractious, and last night Franck and I got into a huge argument; it was technically about the format of the information binders, but like all fights when one is tired and at the end of their rope, it expanded to include so many Bigger Issues that seem so pertinent to an exhausted brain.

Afterwards, I fell into an agitated and sweaty sleep, only for Franck came to wake me up again at midnight.

“You have to get up and see this,” he said, and lead me to the living room window that looks out over the valley towards Beaune.

It was as if God had been feeling as on edge as us, but had decided to do something about it. The entire sky was lit up with huge forks of lightening, followed by a concerto of crackles and booms. The wind howled and the rain poured and it felt like the Apocalypse. It was terrible and magnificent, and one hundred times more beautiful than a puffy white cloud in a sunny blue sky.

Afterwards we crawled back into bed. There was a sense of release, not just from the cooler air that had just banged up against the warm air and pushed it away, but also from nature’s reminder that conflicts are not only necessary in order to create something beautiful, but sometimes they have a strange allure in and of themselves.