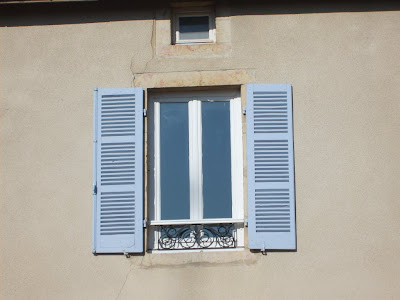 As I have seen with my vacation rental guests over the years, shutters can be a tricky business for the uninitiated.

I would say about one group out of three at our gites don’t realize that shutters need to be clipped back with the little latches so that the breeze doesn’t keep blowing them shut them all day long.
Then there are the people that don’t seem to want to participate in the French tradition of opening your shutters in the morning and shutting them at night fall. I drive past our properties and wonder how my closed-shutter guests can stand living like moles, but when I try to tactfully ask if they are having problems figuring how to open the shutters they say no, not at all, that they just prefer not to.
Unless you are catching up on jetlag or it is BOILING outside and you are keeping them shut to keep in the cool (a widespread and very effective practice) I just can’t wrap my head around preferring to live in the dark. However, when you come right down to it, personal preferences like that are really none of my business; to each his (or her) own, live and let live, etc.
As for me, I love shutters. Not only does their opening and shutting lend a ritual commencement and closing to the days here in Burgundy, but they provide yet another surface to paint a fun colour. And for those of you who have ever stayed in one of our vacation rentals knows, I like to paint things fun colours.
When I first painted our shutters at La Maison des Deux Clochers there were no other coloured shutters around. According to Franck’s mother (and a lifelong resident of the stone house she was born in in neighbouring Villers-la-Faye) coloured shutters were commonplace up until the 1980’s. During this misguided decade, dark brown stained shutters came into fashion and relegated coloured shutters to the past.

However, I decided to buck the tradition. As anyone who has stayed at La Maison des Deux Clochers knows, the house is in the centre of the village. As such, the hanging of our freshly painted periwinkle shutters hardly passed unnoticed. Cars would stop in the middle of the street, and villagers would gather by the church to whisper and point. 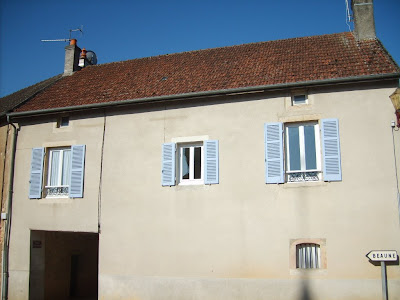 We quickly became known as “the house with the blue shutters” but then a funny thing began to happen – everyone else began to paint their shutters too; mainly variations of blue and purple, but some other neat colours as well such as oxblood red. Then last year the stone house next door to us was renovated, and they painted their shutters almost the exact shade of blue as ours. While this undoubtedly beautifies the centre of Magny-les-Villers, it makes it a little confusing when directing guests to our place.
So now the time has come to repaint La Maison des Deux Clochers’s shutters, and I am once again thinking of rocking the boat. There’s this certain shade of raspberry that has been beckoning for some time now…