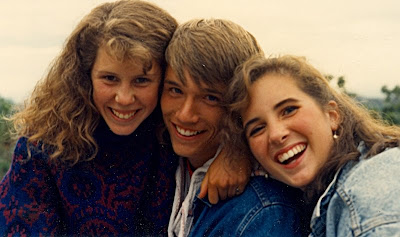 My sisters Suzanne and Jayne attended their 20th and 10th High School reunions last weekend. The highlight of my own 10th High School reunion in 2000 was when my former headmaster asked me when I was expecting my baby. I had given birth to Charlotte more than 2 months previously. Yes, the evening was that stellar.
Luckily I still have 2 years to go before deciding whether or not to subject myself to my (gulp) 20th high school reunion, but in the meantime Suzanne sent me a link to some photos of our high school shenanigans and it got me thinking…being a teenager in Victoria, Canada was a very different kettle of fish from being a teenager here in Burgundy, France.
This is how things happened on the weekends during my high school years in Canada, and even though 20 years have passed, I can’t imagine things have changed that much: 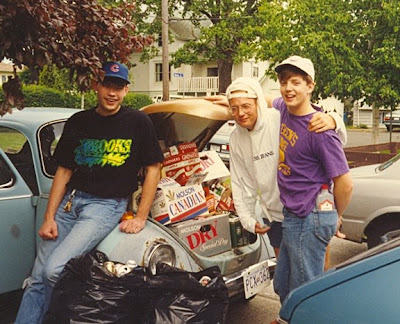 Friday Night
Emissaries sent on a mission to the local liquor store. They are inevitably carded by the world-weary liquor store cashier. They are then forced to loiter outside looking for a down-on-their-luck person with flimsy morals who can be swayed with a few colourful Canadian bills to bootleg alcohol for us minors.
Bootlegger found and sent into liquor store with massive order for 20 or so underage drinkers. Emissaries gleefully fill up the trunk of one of their “beaters” with cheapest available beer for the guys and coolers for the gals in preparation for Saturday night.
Saturday Daytime
Get up late for the unemployed, get up early for the employed (i.e. me), go to work and sell clothes to Victoria’s doyennes of society all day long, get off work at 5:00pm, feeling ready to let off some steam.
Get home, phone around to friends to see if anyone’s parents have either: a) gone on vacation and left house unattended, or b) are amazingly open-minded about rampant underage drinking going on under their noses.
As answer is generally a resounding “no” to both, only option left is to fall back on the plethora of wilderness areas Canada provides its young’uns.
Unanimous decision to do what we do most weekends and consume alcohol on small wooded hill near high school known as “Mount Tolmie.” Party thus baptized a “Tolmie Party” in Victoria teenager parlance.

Saturday Evening
Party attendees tell parents they are going to a friend’s house, then converge on mountain at pre-arranged time, killing time while waiting for emissaries to arrive with trunk full of alcoholic beverages. 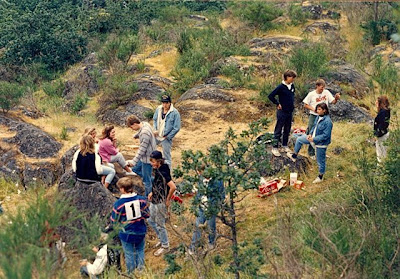