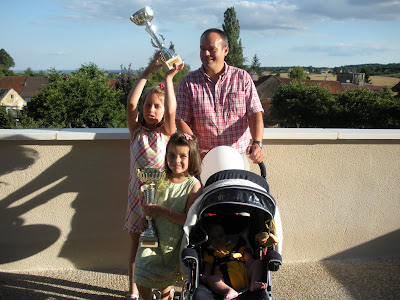 It is the 14th of July today, otherwise known as Bastille Day here in France of course.

Paralyzed (just for the record, I left the merely “stressed” stage in the dust quite some time ago) by the idea of all I have to do before leaving for Canada on Wednesday, all I really felt like doing to celebrate was curling up into a fetal position.

However, several weeks ago in a fit of optimism about how ahead of the game we would be by now, we had signed up for the village meal and fête.
We are crazy to go, I shouted to anyone who would listen. We have so much still to do, it would be insane.
Turns out that, as I had already suspected, Franck and I are indeed insane. We outfitted our bevy in their finery and off we went.
And lucky we did…the distraction from packing proved a boon to our mental health and Franck not only reclaimed his village title in the viscous sport of quilles, but he also won the title of Ping-Pong champion of Villlers-la-Faye! His harem were very proud, of course, and Charlotte and Camille proudly hauled home their daddy’s haul of two trophies and four bottles of wine. 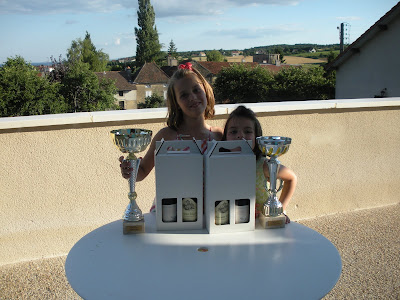 I still don’t know how we can possibly be ready to leave by Wednesday, let alone how we are going to survive the trip, but none of that really matters anymore, because nous sommes les champions!