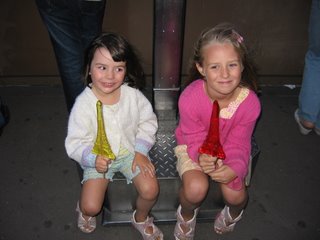 One of the highlights of our summer vacation was a week spent in Paris. Our good friends Joelle and Nicolas have a stunning apartment smack in the middle of the quartier Montparnasse. They offered it to us while they sunned on the beaches of Tunisia, and of course we said “oui, oui, oui!”. To make what was already an amazing opportunity absolutely perfect was the fact that they have a little girl, Violette, who is Charlotte’s age and has a room full of Playmobile and Polly Pockets.

Franck and I lived in Paris for a year in 1993-94 when I did a year at the Sorbonne studying medieval french for my BA and Franck did an assortment of interesting jobs such as a journalist (got a free trip to Morrocco that included a nifty Djalaba) and coat check at the Louvre (free passes galore and he now knows the Louvre like the back of his hand). We lived in an apartment just behind Notre Dame, and just steps away from the Seine. We loved our year, so jumped at the opportunity to be able to share our love of Paris with our girls.

Here is our family’s little guide of our favorite things in Paris:

Franck and I have long thought this is the world’s best ice cream, and Charlotte and Camille have resoundly seconded this opinion, although Camille insists on calling it “Tourbillon” ice cream. You will find this nectar on the exquisite Isle Saint Louis (right behind Notre Dame), where it is made. Here, ten or so shops sell authentic Berthillon ice cream. Look for the line-ups on the sidealks and you’ll have found the right place.

2. The Louvre’s pyramids at night

It’s almost hard now to imagine how shocked many people were when IM Pei went through with his plans to add glass pyramids to the classically renaissance main courtyard of the Louvre in 1989. Now, however, they have now been fully accepted as part of the magical Parisian landscape, and rightly so in my opinion. Although they are certainly neat to look at during the day, where the largest pyramid serves as the main entrance to the museum, I think they really become magical when the museum closes, the tourists leave, and night falls. Go and see what I mean.

I never get tired of this one hour trip, and seeing Paris, its bridges, and most of its important monuments lit up in their nocturnal glory. We always take the boats right underneath the Pont Neuf – called “Les Vedettes de Pont-Neuf”, and of course we always get a seat up top in the open.

4. A dinner and walk at Saint Michel

Paris doesn’t need to be expensive. For dinner, go to Saint Michel and studiously avoid the tourist trap sit down greek restaurants with their plastic food in the vitrines, and instead buy a crepe or a greek sandwich for dinner, walk around being endlessly entertained by the people watching and plate breaking at the aforementioned tourist traps, and finish off your meal with a North African pastry from one of the local pastry shops. Voila – dinner for under five Euros.

We tried this traditional brasserie for the first time on this trip, but we’ve already decided to return. Count on;

We were mortified when the matron led us inside the restaurant, saying our table was ready, and then proceeded to position us right beside our future table, which was still occupied by a nice couple who were commiting the unpardonable sin of taking to long to savour their dessert. After the matron billowed off like a ship at full sail to harangue other customers we apologized to the couple, and reassured them that they should feel free to take their time. They just laughed, picked up the pace a bit, and commented with a shrug, “c’est comme ca ici, mais on reviens toujours quand meme.”

These are both in Franck’s and my old “quartier”. The jardin is a relaxing place to walk around, and includes both a gallery of Evolution and Gallery of Paleontology within its walls – great for the kids. For a break afterwards, go for a mint tea and a pastry in the enchanting tiled courtyard of the neighbouring mosque, and almost put yourself to sleep with the burble of the fountain. Apparently they have great and inexpensive massages at the “Hamam” here too.

This quartier is a fascinating place to poke around. For those who like home shops and funky cafes, you will have found Nirvana here. You can also visit Victor Hugo’s old house here on the Place des Voges for free, as well as Le Musee Carnavalet which documents the history of Paris, from Neolithic to present time – fascinating.

This is where we stayed on this trip, and it gave us the chance to discover this quartier that has managed to maintain its bohemian spirit. Go for the famous cafes such as Le Dome and La Rotonde where Gauguin, Mogdiliani and friends used to hang out. Check out the amazingly comprehensive art supply stores and all of the neat little art galleries. My friend Joelle is opening up a vacation rental in the heart of Montparnasse this Fall, in a converted artist’s studio (baptised L’Atelier) in the same building which housed both Gauguin’s and Mogdiliani’s studios – it promises to be amazing and you can always contact me for further details…

This ancient Roman amphitheatre is hidden behind stout wooden doors on the rue Monge, not far away from our apartment when we lived in Paris. It is a great place to take a picnic, and lounge where the Romans once did, except now you can watch children playing and elderly men debating their petanque game rather than slaves being devoured by lions: slightly less edifying perhaps, but certainly more of a balm to the spirit. Don’t forget to check out the nearby street the “rue Mouffetard” for the more authentic, untoutisty version of the Latin Quarter. If you are there on a Saturday morning, don’t miss the market which runs almost the whole length of the street ambling, twisting, medieval street.

Ahhhh…a tourist trap it may be, but for good reason. The view from up above is just about as good as it gets, especially at dusk when you can watch all the lights of Paris flicker on at your feet. This time we walked down by foot from the second floor, and for those who don’t have vertigo, it is very fun.

Camille and Charlotte will have the last word. Pretty much all that my daughters retained from their first Paris trip almost two years ago now (except for Violette’s toys) was the Eiffel Tower shaped lollipops that Nicolas had bought the kids from the cafeteria on the first floor. Since that momentous day, the girls would wax nostalgic about these special lollipops any time Paris was mentioned. Thus, this was the top and non-negotiable item on their “List of Must-Do Things” this time around. As you can see from the photo above, the girls got their wish and, clearly, when it comes right down to it, Paris is really all about the Eiffel Tower lollipops.