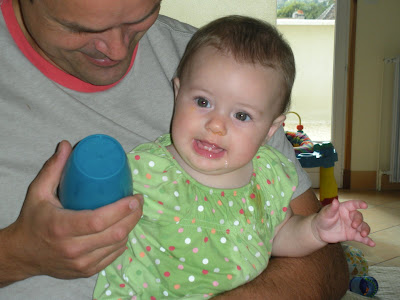 I finally capitulated today and took Clem to see our family doctor. She has been whinging constantly over the past week. I kept chalking up the grumpiness to teething, but Franck began to ponder whether we were actually neglecting an ear infection or something – I think maybe he was also harbouring a secret hope that the unpleasantness could be cured by a round of antibiotics. Even I had to ask the question – how long can teething possibly drag on for?

Clem was proclaimed to be the picture of health, however, and the doctor didn’t even think the radical change in her disposition could be explained by teething. He felt that she was merely developing a temper.

Gee, I wonder who she could have inherited that from (*cough*)!?