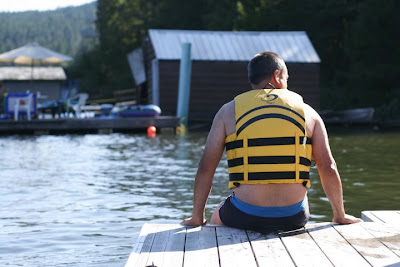 Frenchitude Lesson #7 : Men, Don Your Speedos!
Along with the French attitude towards vasectomies , Speedos are another aspect of French culture that can just about give Anglo-Saxon men a coronary.

Many of our guests decide to go down to the municipal pool in Beaune or Nuits-Saint-Georges to cool off during one of our hot summer days here in Burgundy. When they arrive, they are distressed to discover that the billowing bathing trunks almost all North American men, with the exception of the Olympic swim team and creepy guys with a penchant for animal prints, are banned in French pools.

There are signs to this effect everywhere, and if anyone looks or sounds even remotely foreign they will be informed of the Speedo-only rule about a hundred times before they can even get as far as the changing stalls. The pool in Beaune has even installed a Speedo vending machine so as not to deprive surprised foreigners of their swim.

I have found that the Speedo dictate is, unlike so many other French rules (i.e. legal parking, speed limits, lining up in an orderly fashion, etc.) categorically closed to “interpretation”. As far as I can tell, a male of any age who is not wearing a Speedo-style bathing suit will not be allowed into any public swimming facility in France.

The reason that is always cited is “hygiene”. Rather than go into detail I prefer to leave you, dear reader, to ponder the how and why of that.

I cannot tell you how many of our male guests have decided that cooling off with an invigorating swim is simply not worth the trade-off of having to don a Speedo. They are beyond mortified at the prospect, and while I listen sympathetically to their harrowing near-miss Speedo incidents I can’t help but have a little vindictive thought float through my head, Why should women be the only ones wearing body revealing bathing suits?

In contrast, French men like my husband Franck wear Speedos as a rule. Granted, his is the more socially acceptable shorts-style, but a Speedo by any other name is still skin-tight.

My Canadian brother-in-law Greg has also taken to wearing Speedos of the same style. He finds them so much more comfortable than having a metre of wet fabric billowing and flapping around your legs when trying to swim or water ski. However, he’s noticed that while he and Franck are sporting their Speedos many of his North American friends of the male gender, so profound is their discomfort, can barely look at the two of them.

Why should the comfort of Speedos be forsaken in North America? What is there to be ashamed about? The Speedo divide illustrates to me that North American women aren’t the only ones feeling bad about their bodies.

One of our close French male friends still wears his beloved khaki Speedo he was issued about twenty years ago during his military service.

It is about three sizes too small now, but as he says, “Why should I care how it looks? It’s comfortable. I’ve fathered several children; I have nothing left to prove.”

Powers of seduction are highly prized in France. However, someone who is “bien dans leur peau“, or “comfortable in their own skin”, like our military-Speedo-wearing French friend, is seen as far more seductive than someone who possess what North American society would consider a “perfect” body yet obsessively checks themselves out in every available reflective surface.

Here, bodies are prized more for what they can do – walk, swim, run, hug, make children, etc. – and the pleasure they can give us, than how they measure up against some unattainable standard of Adonis-like “perfection”.

So, for you North American men out there, if you find a Speedo more comfortable than your billowing trunks, just slip one on along with some Frenchitude. Don your Speedo with pride!

**Frenchitude Fridays (French + Attitude = Frenchitude) give ideas for injecting a bit of frenchness into your life, whether you live in Australia or Addis Ababa.