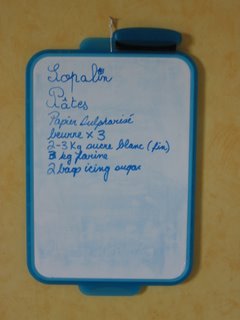 In a desperate effort to wrangle our grocery bill under control, Franck and I have instituted a note board system in the kitchen, where we mark what we need to buy during the next foray to E. Leclerc. We are NOT allowed to buy anything not on the list (i.e. oooooh look, the Petit Ecolier biscuits are on sale!) , and even the items on the list are cause for lively debate most of the time.

I have to admit this system is saving us quite a bit of money, particularly as it prevents me from, in the throes of a big grocery store headspin, wondering “do we have any mustard? I love my mustard…I think we may be running out…maybe I should pick up a bottle…maybe two as life undoubtedly isn’t worth living without mustard…” and then returning home with three jars of mustard to add to the five we already have stored in the pantry.

As long as I have known him, Franck’s hand-writing has been full of portent and mystery, being a cross between egyptian hieroglyphics and the greek alphabet. I have become so used to being unable to decipher it that I stopped trying many moons ago, and certainly don’t bother to try and read which items he has written on the note board. I, on the other hand, have always been proud of my unfussy yet emminently legible writing style.

So yesterday when we were cleaning up the lunch dishes I was completely shocked when Franck’s hand left the message board after marking down two new items to buy; I could actually read what they were. Not only that, but the items were noted down in the loopy, lush cursive that eight year old girls favour. I laughed so hard I had to sit down, and Franck, struggling to maintain his dignity, explained that he was trying to write better so that Charlotte, who is learning to read at the moment, doesn’t follow his bad example.

Unable to fight an irresistable urge, I got up and added a daisy above Franck’s perfect little “i”.

To prove his point Franck called Charlotte into the kitchen and she read the items “Sopalin” (paper towel) and “Pates” (pasta) perfectly. She also commented that the little flower was a nice touch, which Franck took credit for, and most smugly too.

Then Franck pointed to items I had written below, and Charlotte squinted for a moment.

“I can’t read them,” she said, reprovingly. “The writing’s too messy.”