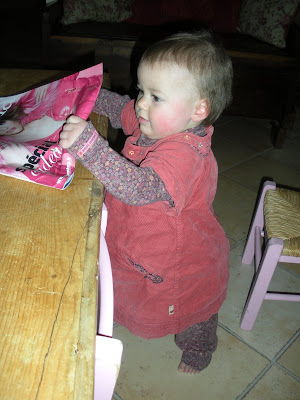 Who wants toys when Mom’s magazines are lying around?

Now this is a subject very close to my heart, particularly in December when the toy catalogues start clogging up our mailbox.
Two years ago my younger sister Jayne visited her French friend Claire, who had recently had a baby boy, and Jayne commented several times on the surprising lack of baby clutter in Claire’s tiny Marseilles apartment.
Ahhhhhhh….the utopic vision of a place where both babies and adults can live in harmony. I have to say, I have almost found it here in France.

The French don’t go in for the gee-gaws and huge play apparatuses that North American parents seem to feel obliged to litter their house with once Baby arrives on the scene.

Not only do the French object to how the clutter clashes with the carefully chosen décor of one’s interior, but they believe that little children aren’t that interested in toys when it comes right down to it. Rather, babies tend to be drawn to things they see the bigger people “playing” with. In our house this translates into the measuring spoons, the big girls’ dolls, and my magazines. I’m also deeply troubled and ashamed to admit that Clem has an obsession with the TV clicker.

In Canada, I had an obscene amount of brightly coloured plastic crapola for Charlotte and Camille, and the truth was that they played with it very little.

For Clémentine, however, I find myself doing the baby stuff in a far more minimalist, French style. For one thing, we have a relatively small house for a five person family, as is the case with many French people. I have learned that the smallest babies really only need clean diapers, soft clothes against their skin, someone to give them a bottle, a squeezy teething giraffe named Sophie, and a comfortable place to sleep to be content.

In this light, I had a lot of fun adding a “French Baby Essentials” section to our “French Favorites Store” on Amazon. To have a boo, just click here;

http://www.graperentals.com/store.html
Besides Sophie La Girafe and Petit Bateau bodysuits, this time around I found myself, like many French people, only allowing one baby apparatus in the house at a time.
Right now it’s the hand-me-down play park where I can pop Clem if I need to do something and can’t be distracted by the prospect of falling furniture or the flotsam and jetsam she will eat off the floor. Otherwise, she enjoys cruising around on her own (with the helmet, of course, as befits a trainee hockey player).

She has a drawer in the living room she knows is hers filled with books and the odd piece of Tupperware. Clem’s most prized possession, the one she covets above all else, is a broken old TV clicker she keeps secreted away in her drawer. She shrieks when anyone gets too close to her TV clicker, like a mother bear over her cub.

For Christmas, Charlotte and Camille were in a fizz about writing a list to Santa Claus for Clem, but I told them that here in France the Père Noel knows that babies like wrapping paper more than presents.

I have bought her a Fisher Price telephone from us, and a gold bracelet with her name engraved on it (called a “gourmette” here in France) from Santa with some of the money that I would have, when Charlotte and Camille were babies, spent on space-consuming “educational” toys that we would have tripped over for two years and then ended up chucking in the dumpster. 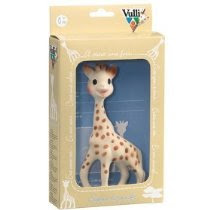 **Frenchitude Fridays (French + Attitude = Frenchitude) give ideas for injecting a bit of frenchness into your life, whether you live in Annecy or Atlanta.