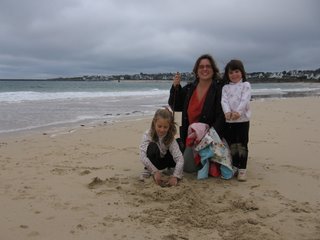 OK, so I really needed a haircut. Things have been so busy lately that, to use my dear friend Andrea’s expression, at times I felt like my head was going to pop off. So one week ran into another, and my hair grew longer and longer, until my cute layered cut began to betray my Canuck roots and morph into a long, shaggy hockey mullet. As my Canadian friend Heather, who lives in Dijon, reminds me “Business in the front, Paaaaaarty in the back!”

It looked really bad, but having lived in Canada for most of my life I never dreamed in a million years that anyone would actually come out and say so…

PHOTO: The girls, my mullet, and I in Brittany last week.

So I was out on my weekly Monday morning walk with my friend Charlotte this week, and I casually announced that I had made a hair appointment for the next day.

“Are you getting it cut?” she demanded, somewhat stridently.
“Yes,” I said, absently fingering the lower layer of my mullet. “It’s gotten way too long.” I expected her to perhaps murmur in agreement, but then to cushion the blow with some sort of vague compliment about my cowlicks or something.
“Whatever you do,” she said. “Don’t let your hairdresser give you the same cut she gave you last time. That cut did nothing for you – something about the longer bit at the bottom really made you look old and hard.”
Gulp. Shock rendered me speechless. Could such words actually be coming out of the mouth of Charlotte – someone I know to be kind and generous and a very good friend? It took me at least a minute, but I made a heroic effort to rally around.
“Well, maybe I’m just starting to really look older…” I let out a hollow laugh. When in doubt, employ the old Canadian standard – self-deprecating humour.
“No, it’s not that,” she disagreed. “It was definitely the haircut. It was a bad haircut. That bottom bit doesn’t suit your face.”

In a daze I returned home from my walk and proceeded to make Franck’s life miserable for the next hour until, sitting down for lunch, he finally asked, “so why the hell are you being such a grump?”
I stared at my quiche for a moment, until it all came out in a whispered rush. “Charlotte said my haircut makes me look old and hard. Have I really been going around looking awful for the past few months without realizing it?”
Franck studied me across the table. “No. I think you’re beautiful.”
“Thanks,” I mumbled, sending silent thanks to the Gods for having such a husband, but then added, “But even if she thinks that, I can’t believe she actually said it!”
Franck considered this. “That’s considered being a good friend in France – telling the truth. It means she considers you a true friend.”
I mulled this over, still disgruntled.
“Would any of your Canadian friends have told you that?”he asked.
“No!”
“Would you have rather Charlotte lied?”
“Yes!”

But the next day as I sat in the hairdresser’s chair, staring into the mirror, I grabbed a hunk of the bottom part of my mullet. “I think I’m ready for a change,” I said. “Cut this bottom layer off completely, I’m sick of it.”

So she did, and for the rest of the day I received amazed compliments from all and sundry, even from Charlotte. And this morning as I stared at my reflection in the mirror I had to admit – it was a vast improvement, and something I might not have thought of changing if nobody had told me…

Still…I think I may work on teaching my french friends some good old Canadian tact.