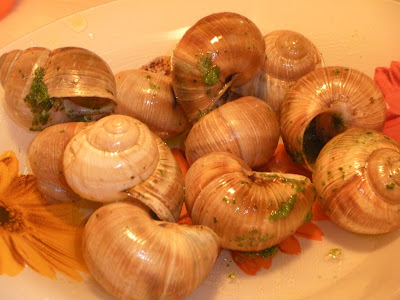 Many French people celebrate their Christmas on Christmas Eve – known as “Le Reveillon de Noel” – rather than on Christmas Day itself. Franck’s family, however, traditionally has the big celebration at lunchtime (but, this being Burgundy, “lunch” goes until around 7:00pm) on Christmas Day at my sister-in-law Stephanie’s house.

We had big plans for Christmas Eve, going to the evening Mass, maybe having friends or family over for dinner…But we were so blinking tired by the time the 24th rolled around, not to mention the fact that Clem had come down with a fever and a cold, that we just opted for a family evening chez Germain.

Franck bought 4 dozen escargots and we settled down to a Christmas Eve escargot feast – something that was so delicious, easy, and fun that I think it may become a new Germain family tradition. 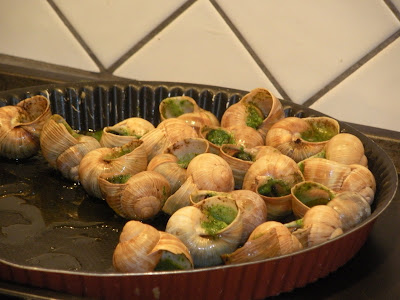 Here they come out of the oven, piping hot and smelling of garlic and parsley. 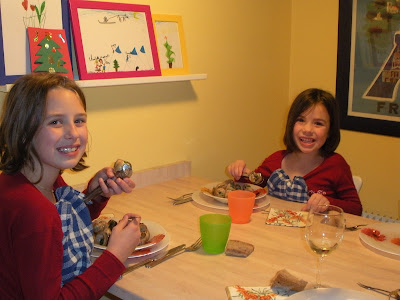 Charlotte and Camille were deft in their use of escargot pinchers, and tucked into their dozen with enthusiasm. Clem was in her high chair, eating “ah-toes” of course. 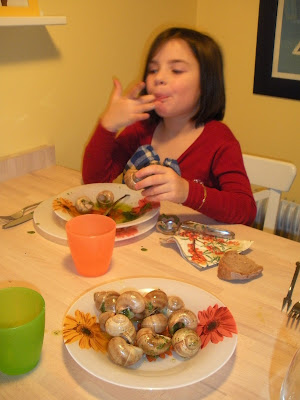 As far as Camille is concerned, snails are far more finger-lickin‘ good than chicken. 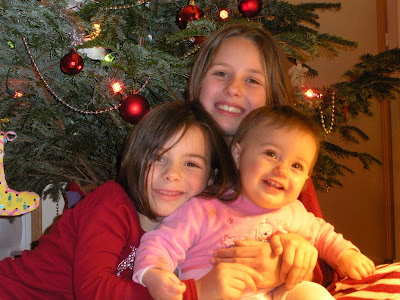 And here are my three girls, two with tummies full of 12 escargots each, and one with “ah-toes”…next year we’ll start her with a half-dozen.