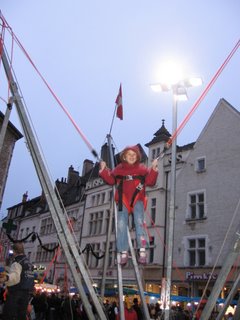 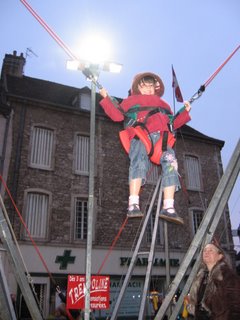 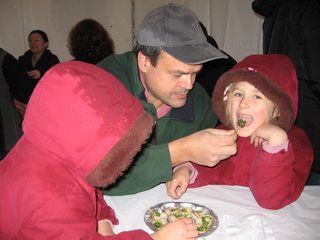 Finally emerge from bed, call Charlotte where the girls are sleeping over to tell her that I indeed probably won;t be down to pick the girls up before lunch

Finally get down to Beaune to pick up the girls, who we take into town, despite the spitting rain so that they too can experience the “Vente des Vins”. We wander past the “Halles” where the wine auction is in full swing, and continue on to the Place Carnot. After a madatory ride on the merry-go-round that looks as though its doing brisk business, we tour the stands around the place and finally stop at the one that sells escargots. The girls clamour for some (as I was a child that subsisted for years on bologna and velveeta I never in a million years could have thought myself capable of betting childfren who would be clamouring to eat snails, but there you go). Tha ir is redolent of garlic and butter and parsley, and when we are served up our “douzaine d’escargots”, piping hot, I distribute toothpicks and we devour them in record time.

Wit our tummies now happily full of snails, we follow the parade of folkdancers and bands through the rue Carnot up to the Place Monge, where Charlotte and Camille discover the elastic trampoline is installed, just as it was last year.

The contraption, something I have never seen before anywhere else, is four trampolines touching edge to edge, making up a rough square. Each trampoline has poles comign up from both suides and from behind, to which a harnass is connected with huge ruber bands. So the kids get strapped into the harnesses, and then when they bounce it is an amazing combination of bungy jumping and trampolining. Charlotte, who as far as I can tell is afraid of nothing, had been dying to try it last year but there was a huge line-up so I had (somewhat relieved) said no.

This year however the line-up was minisicule, and I figured my little daredevil was allowed some fun too. Imagine my surprise, however, when Camille asserted that she also wanted to try. She seems to have inheirted what my husband refers to as “the Bradbury sense of self-preservation” meaning that if she can help it she is very careful not to put herself in danger’s path.

So I say yes to both my little risk-takers, they are strapped in and spend a good ten minutes hurtling up to the sky in their harnesses. It actually looks like a heck of a lot of fun.

The rain is coming down harder, but the lights have all come on and create a sparkling canopy which we walk under to get back to out car.