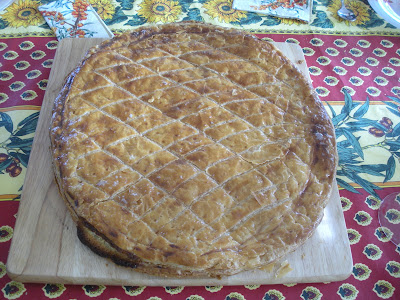 If you are lucky enough to be in France during the month of January (which is actually a great time of year to be in France, as you will read in next week’s tip) and you want to live like the French, eat a galette.
These special cakes are traditionally only made in January to celebrate Epiphany. They’re absolutely delicious – flaky pastry filled with almond paste. Better yet, inside hides a fève which used to be a bean but has now, much to the joy of children all over France, been replaced by a ceramic person or object. 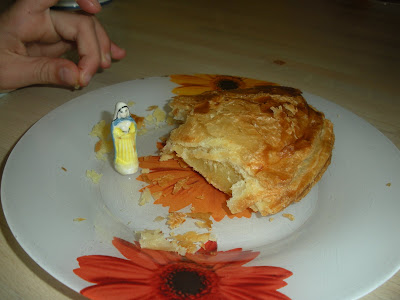 Charlotte was the lucky one this weekend, and the fève in her case was a statue of the Virgin Mary (I think) or maybe Carla Bruni on a State visit to an Arabic country…
The galette always comes with a cardboard crown, and the person who finds the fève in their slice gets crowned le roi or la reine. They can then choose a reine or a roi to share in their glory (but not their fève!).
My parents came over last January to help us when Clem was born, and they discovered the joys of Epiphany in France for the first time in their lives. For the last 10 days in utero Clem enjoyed at least a galette a day. 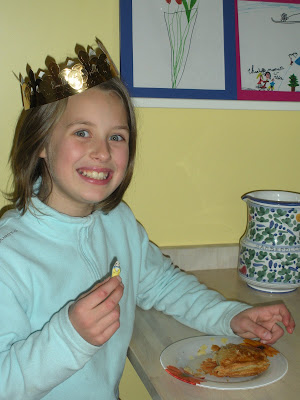 Here is Charlotte, so delighted to be la reine that she forgot to choose a roi. Too bad for Franck, because as the only male in our household he would have been a shoo-in. 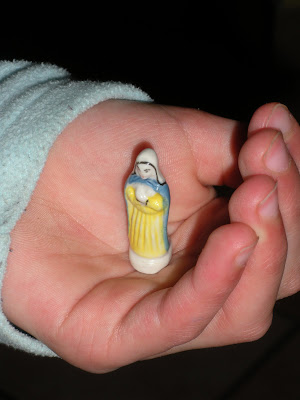 Here is a close-up of Charlotte’s Virgin Mary / Carla Bruni Sarkozy in Iran before she gets added to the girls’ ever increasing fève collection. C’est dommage that January only has 31 days…