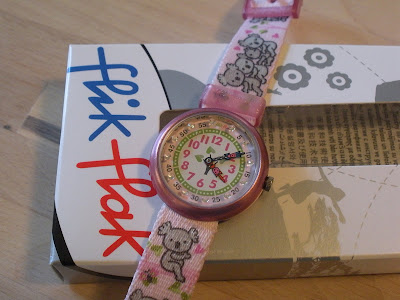 One thing that I personally feel is often missing from our lives are rites of passage. Nice rites of passage (as oppossed to fraternity hazing or anything that involves cutting flesh) make us feel like we belong to a group and allow us to pause a moment and savour the headway we have made in this life of ours.
For my bevy I try to build rites of passage into their lives wherever I can. As a result, I am constantly on the lookout for traditions to include in our family repertoire.
In my friend Charlotte Buffet’s extended family, it is traditonal for every child to receive a watch on their 7th Birthday.
There is a reason behind this tradition, and one that is well-ensconsed in french culture. In France it is always said that when a child reaches the age of seven, they enter into l’age de raison or the “age of reason”. “Sept ans, age de raison” goes the rhyme. The French see seven as the magic age when children definitively leave babyhood behind them; the seventh Birthday is seen as an important first step on the road to adulthood.
At seven, a child is therefore viewed as capable of learning “reasonable” things such as telling the time, hence the meaning of a watch.
Here is Camille at her seventh Birthday party on Wednesday just after opening her watch. She knew she was going to get a watch from Charlotte B. for her Birthday, and she has been looking forward to it ever since Charlotte G. got her watch on her 7th Birthday… 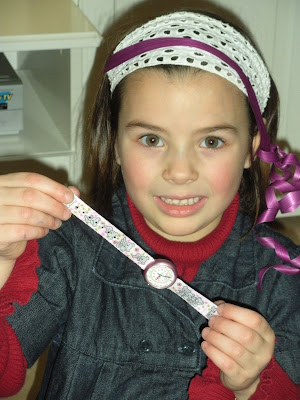 As you can tell by her expression, to Camille the gift is far more than a watch; it is recognition that she has earned the right to be treated with a certain gravitas by the world around her. Anyone who knows Camille can tell you that Camille deeply values being taken seriously. 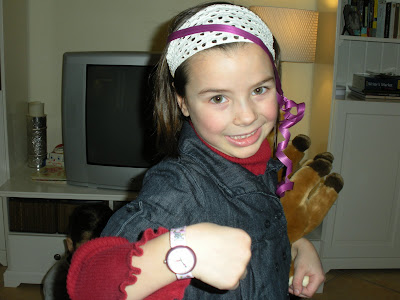 I have no vested interest at all in Swatch, but I have to day I LOVE the “Flik-Flak” brand of watches (that are a sub-brand of Swatch watches) for the traditional 7th Birthday watch.

They are sturdy and water-proof, but have gorgeous colourful designs for both girls and boys. They also come out with a cardboard clock and are designed to teach all those reasonable seven year olds how to tell the time.

As for the purple ribbon tied around Camille’s head, I’m frankly not sure quite what that is all about. Anyway, it would be pretty boring if she was reasonable all the time.

**Frenchitude Fridays (French + Attitude = Frenchitude) give ideas for injecting a bit of frenchness into your life, whether you live in Macon or Maine.