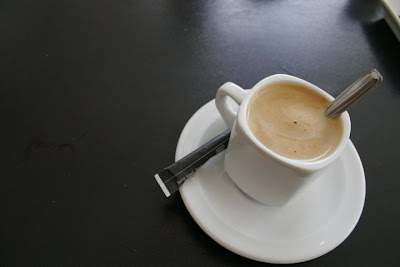 There is one particular incident which occurred when Franck and I were living in Canada that struck him as so absurd, so bizarre, so wrong that he still mentions it on a regular basis.
That morning he had gone down to our local bagel shop to pick up a mixed dozen and a pot of cream cheese.

On the way out he spied a woman on her way in and, without even thinking about it, he held the door open so that she could walk through. She shot him a filthy look, and before he could close the door behind her she looked back over her shoulder.

“I’m perfectly capable of opening doors for myself you know!” she huffed.
Franck came home so stunned from this encounter that I was amazed he hadn’t forgotten the bagels on the car seat.

He was brought up, like the huge majority of French men, to treat women with a little bit of extra attention and gallantry. It is simply understood over here – I’m still mulling over the thesis that maybe it has something to do with the Catholic veneration of Virgin Mary – that women; old or young, ugly or beautiful, deserve special treatment.

I have tried on many occasions to point out to my husband that the bagel-shop woman was probably just a paranoid cow, and that God knows such people exist the world over. To this day, however, Franck is still reeling in shock from that woman’s reaction.
Last year I had a lovely guest in her early 60’s staying at Le Relais du Vieux Beaune. One morning she sat herself down at one of the local cafés to enjoy a morning beverage and people watch (which endures as one of my favorite activities here in France).

The café was busy, and she installed herself at one of the only remaining tables on the terrace, one that hadn’t been cleared off yet. The waiter, who was run off his feet, must have thought she had already ordered, or that she had already drunk her coffee, because she waited for a long time and no-one came to ask what she wanted.

She finally leaned over to the handsome French gentleman sitting beside her and in her basic French asked if the waiter had been by to take his order yet.

When her neighbour realized what had happened he summoned the waiter and immediately resolved the misunderstanding. After the waiter had apologized profusely, the neighbour asked my guest what she would like to drink. She ordered a café au lait, and the two of them chit-chatted in his awkward English and her awkward French about Beaune and wine and her impressions of France thusfar.

The man eventually went inside to pay his bill. When he reemerged, he said that he unfortunately had to get to work, but that he had very much enjoyed their conversation. My guest glanced at her watch and realized that she had to be off too, and opened her wallet to pay her bill.

“Non, non,” the man said. “I have paid for your café already. Je vous invite.”

When my guest began to politely protest he waved his hand and said, “It is my pleasure. You are a visitor to my ville and I am sorry that you had such a problème being served. I desire that you enjoy your time in Beaune.” And then with a charming smile, off he went on his elegant way.

My guest was pleasantly surprised, yet a little concerned about the propriety of it all. I assured her that such random acts of gallantry were simply a wonderful part of life here for women, and were meant to be savoured.

For example, when I was starting to get hugely pregnant with Clémentine, I complained to one of our close friends that I was having an impossible time bending down to put on my shoes. The next weekend he showed up with a gift – the longest shoe-horn I have ever seen, so long that I could use it to slip on my shoes without bending down at all. It was an adorable gesture, and one that still warms my heart when I think about it.
I believe that random acts of gallantry can, and should, be liberally performed and appreciated no matter where one lives.
**Frenchitude Fridays (French + Attitude = Frenchitude) give ideas for injecting a bit of frenchness into your life, whether you live in Besancon or Bangalore.