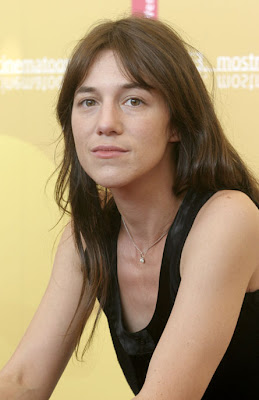 Beauty is in the eye of the beholder, they say. If this is true, then the shocking consensus of opinion in many countries of the world is worrisome.

There is nothing I hate more than travelling to a distant country only to be offered the same ham sandwich on white Wonder bread cut into triangles that I can buy at home. Likewise, I hate it when I see so many different women sporting the same bleached blond, silicon boobed, pumped lip look.

This summer back in Canada I found myself in a room with a bunch of girls whom I had grown up with. They had been just as slobby and imperfect as I was while growing up, but now they had been polished to an identical sheen. They were encased in matching neutral sheaths, they all had straight long blond hair, they all had perfectly made-up (and suspiciously wrinkle-free, seeing as we’re all pushing 40) faces, and those who weren’t naturally blessed with large breasts had clearly gone out and purchased themselves a pair.

I felt like I had stumbled into the pages of “The Valley of The Dolls”. I certainly was the odd duck out in my make-up less face (except mascara, which I rarely go without), wrinkled linen shirt, and Capri pants.

Is this cookie-cutter appearance what passes for beauty now? I found myself wondering. Personally I didn’t find my former classmates beautiful; I found them quite scary looking to tell the truth. They didn’t look alive somehow, and they certainly didn’t look like themselves – you would be hard pressed to tell one from another.

I also was struck by this “cookie-cutter beauty” phenomenon when I was living in the UK, where I couldn’t help but notice that the vast majority of women on TV looked virtually interchangeable; all blond, blue-eyed, pale skinned, and perky. In the UK I found the phenomenon more annoying than scary, but I did fall to wondering how the vast majority of the British population (who didn’t bear even the faintest resemblance to the TV presenters) felt about having this image of blond, perky (and annoying) beauty constantly reflected back at them. Not more beautiful, surely.

That’s why I gotta say it – I love the French take on beauty.

In France, men swoon and sigh over creatures such as the actress and singer Charlotte Gainsbourg, in the top photo. She’s not blond, not blue-eyed, has no breasts to speak of, yet I have personally witnessed French men (including my husband) with their eyes riveted to the TV set, barely breathing, when she is being interviewed.

When the interview is over Franck always lets out a deep sigh and says something like “She has un charm fou.” What he means (I think) is that there is an unbelievable charm in her shyness, her reticence, not to mention the blinding sexiness in the comfortable way she inhabits her looks…

I wonder, though, if Charlotte Gainsbourg would be similarly mooned over by British or North American men? Somehow I doubt it.

Same goes for another one of my French favorite actresses, Romane Bohringer in the photo below. 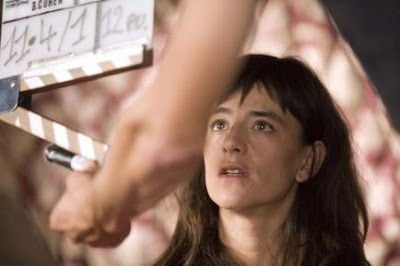 She is, just like Charlotte Gainsbourg, considered very beautiful and attirante (which literally means she “draws you in”). She is unrepentantly cerebral and temperamental, and is generally considered by French people – men and women – to be one of the sexiest people around. 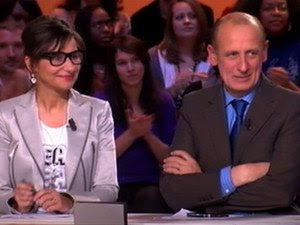 And just take a look at the above photo. This is a shot of my favorite evening TV show – Le Grand Journal on Canal + – which I am going to desperately miss when I move back to Canada.

To the left there is one of the show’s popular presenters. I don’t even know her name, but I adore the way she makes the most of her one-of-a-kind face (and nose)with her trademark huge black glasses. She is considered a very attractive woman.

I love how here in France beauty isn’t about making yourself look like anyone else, but rather making the most of what you’ve got. It isn‘t a matter of competition as to who measures up the most closely to a widely accepted canon of beauty, but rather of personal expression.

Mind you, my five years in France sadly haven’t conferred on me the ability that French women posses to perform this feat. It is all I can do to find five minutes to pull on my wrinkled clothes in the morning and swipe on my habitual coat of mascara.

However, I love the idea of living in a country where, if I ever do find the time to make the most of my assets, they will be admired even if they are not remotely blond or silicon.

In the meantime, I have invested in a pair of heavy rimmed black glasses.

**Frenchitude Fridays (French + Attitude = Frenchitude) give ideas for injecting a bit of frenchness into your life, whether you live in Crow’s Nest or Carcassone.