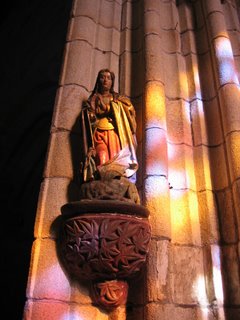 Two days before coming to Canada, the girls’ school, Saint Coeur, held a special children’s Mass to celebrate the Immaculate Conception and to ready everyone’s spirit for the Christmas.

I thought the idea in and of itself was a good one, although as with all things “church-y” I had some reservations as to its execution. But my dubiousness be damned – the girls were quite insistent on going. Charlotte’s teacher this year was singing and directing the school choir, and one of the girls’ many half / second cousins (not sure which- Franck has a huge family – she is the granddaughter of Franck’s aunt and I have no idea what this technically makes her) Noemie, was singing and had stopped Franck in the school yard that morning to ask if we could all please to come and watch her.

After school all the children at school were chattering about who was going to church and who wasn’t; it went without saying that everyone wanted to go. I found it amusing how the Immaculate Conception Mass was the must-attend social event of the season for Charlotte and Camille and their school mates.

The service was in the Notre Dame cathedral in the heart of Beaune, just one of the many jaw dropping stone churches in France that – oh – date back to the early Middle Ages or so.

Outside, we met Franck’s Aunt Renee and another half or quarter aunt, Madeleine (the wife of Franck’s mother’s cousin – not sure what this makes her either), who had also come to hear Noemie sing. Inside, I was astounded at the number of people. Almost all the old wicker church chairs were full of families from the school. Franck settled himself against one of the massive stone pillars, and as the alter boys swung the incense balls around Charlotte and Camille spotted a whole bunch of friends in the audience and were kept busy waving to them.

The priest emerged in his priestly garb, emblazoned with a portrait of a very holy looking Virgin Mary in a circle on the back of the gown. He was bespectacled and extremely young; it wasn’t too long ago that he had been a child himself. Alrighty I settled back in my wicker seated chair Let’s hear what this young buck has to say about the Immaculate Conception.

As many a modern young woman, I not surprisingly have a bit of a problem with the whole veneration of the Virgin Mary / Immaculate Conception thing in the Catholic religion. While I appreciate the fact that the Catholic church has some kind of female presence (as you certainly won’t find it in the priesthood or the Vatican, but I digress…) I have a problem with the fact that Mary is such an atypical woman, regardless of culture or era. Despite the much lamented depravity of our times, I doubt one would have any much more luck in France in the 1400’s finding a woman that was; a) a virgin, and b) bore a child that was not the result of sex, but of an act of God.

For me, the Virgin, while a lovely symbol in her serenity and love, is simply too perfect for me to truly relate to. She is so far from how I see myself that all the praising and praying to her ends up alienating me most of the time.

Mary Magdelene, on the other hand…she hasn’t been mentioned very much in the few Catholic services I’ve been too in France, but I have always suspected that there was a woman who I could pray to. A woman who was innately riddled with imperfections and desires, who sinned, many times and greatly, and who still managed to gain redemption despite all that. Come to think of it, who, whether they be a woman or a man, can’t relate to that?

But as luck would have it, the priest at the Mass didn’t seem fit to launch into the Immaculate Conception right away without doing a brief but fiery detour around The Original Sin. So we were regaled with the story of Adam and Eve, and how Eve didn’t want to listen to God, and forced Adam to disobey as well. She had the gumption to simply say a big fat “No” to God, and to make a long story short she and her despicable actions have damned all humankind (for evermore, amen).

I could feel the steam rising in my head until it was almost ready to blow out my ears, when Camille interrupted my inner indignation.

Not being overly familiar with the church or its toilet facilities, I convinced her she could wait, but by this time the matter of The Original Sin had been dispensed with and the priest had moved on to the Heart of the Matter.

Unlike Eve (bad), the Virgin Mary (good) said “yes” to God when he asked her if she would like to bear Jesus. With this, the priest saw fit to go on a anti-abortion tirade about how Jesus as an embryo (because as a Catholic priest, I suppose he is privy to the secret documents that prove that God put Jesus into Mary’s womb in embryonic form) was a human being and that all embryos, no matter how small, are all human beings. I don’t think any woman who has ever carried a child, or ever had the misfortune of a miscarriage, would ever say anything different. And yet, I feel a young person on welfare, or a rape victim, has every right to have a different opinion on the feasibility of a pregnancy than a celibate priest.

Just then a little two year old boy must have broke free from his parents and climbed the steps up the the alter where the priest was preaching, babbling away (and yes, I am entirely aware of my displaced modifier here) . The priest, who had just finished sermonizing about the sanctity of embryos, and life, and children, jostled the wayward child of with several firm pushes with his foot.

This startling hypocrisy aside, the priest’s very preachiness made me furious. The thing is, if I truly felt that I could live without any spiritual meaning to my life, I simply wouldn’t have cared what this priest or any other has to say. And yet I have come to the realization that personally I cannot live in a spiritual vacuum. I need belonging, I need meaning, I need a quiet place to escape from the chaos of life and think about all those questions that bind us together as human beings. Why am I here? What does all this mean? Do I have a purpose, and if so, what is it? What happens to me, all my thoughts and emotions and experiences and longings and confusion, after I die?

This means that I, like so many other people, am searching. And when I go into a church wanting to find something to grasp on to and all I find is judgement and rhetoric – and not humanity, a little bit of my heart breaks.

Communion time came, and I asked Franck whether he was planning on taking communion. He shook his head vigorously – a definite no. I wasn’t surprised that Franck was no more thrilled with the priest than I was. I know that Franck feels that belief is a very personal matter and that anyone who tells you how things are, instead of agreeing to accompany you a while on the road to asking these questions, is not really worth listening to. And, perhaps as a fault of his youth, this guy certainly seemed to think he had all the answers.

The girls, however, were hell bent on taking communion, so they very seriously walked up to the front and crossed their arms over their chests, as instructed (to show they hadn’t yet had their first official Communion) and the priest blessed them and made the sign of the cross in water on their forehead. They came back to their seats, absolutely thrilled, and I believe, truly feeling that they were a part of something that Franck and I, paradoxically, don’t mind them being part of.

As I often say, I don’t mind them rejecting their Catholicism later on in life, but at least they have the framework of something to reject, and to lean on later on in life if they ever need it. And I harbour a thin hope that maybe then, having felt part of the Church since their youth, they may be able to take comfort in the ritual and traditions of it, instead of asking from it more than it can seem to deliver, like their mother.