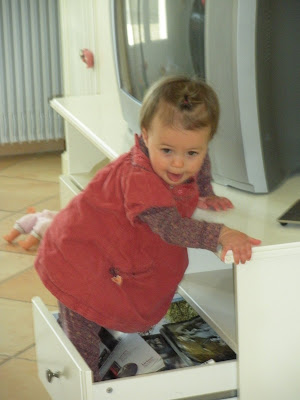 Bon d’accord. Admittedly Clémentine and I are having a bit of a rough time with this one at the moment.

I tell her “non” about…gee, I don’t know…a HUNDRED TIMES in any given day.

Non, don’t empty the garbage can!

And, a favorite at the moment, “Non, don’t sit in the drawer!

It’s not that I have any problem with Clem sitting in her favorite drawer per se. I’m sure it’s most comfy, and as a matter of fact this favored activity has restored my faith in the durability of IKEA furniture.

The problem is getting out of the drawer. Turns out this is a hazardous business for a 14 month old. Half the attempts end in Clem slipping and slamming her forehead against the Portuguese tile floor. In fact, I am seriously contemplating a return of The Helmet.

That’s why the photos are blurred. I was snapping them as I was racing in (chanting my non! non! non! mantra) to swoop her out of harms way.

When I was back in Canada with Charlotte and Camille five years ago I noticed that most mothers would accompany “no” with long winded, breathy explanations.

Some mothers were even quite vocal about refusing to utter the word “no” to their child under any circumstances. The reasoning for this was generally that a child who heard “no” would be blinded to the myriad of possibilities in the universe.

I’m all for respecting different parenting styles, but the abolition of “no” always sounded not only impossible to me, but unwise.

The French attitude is very straight-froward. They figure that as children are, and should be, hearing frequent “nons” on their way through life, better they get used to the concept early.

The huge majority of French parents would never consider banning “non” from their parenting vocabulary. This is underpinned by the widespread belief in France that children are truly happier when they grow up with clearly defined boundaries. Failing to provide such boundaries is considered shirking one’s role as a parent.

I could natter on for hours to Clem, outlining exactly why I am concerned about The Drawer. She, however, would have no idea what I was going on about and would promptly get back in the drawer the minute my back was turned.

So I’m just starting with one word. Non. If I could just get her to understand and obey those three little letters that would be huge step in the right direction.

We’re not quite there yet, as you can see from the photo below. 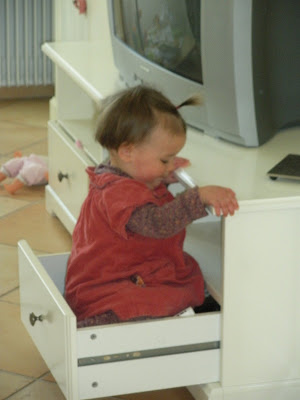 ***Frenchitude Fridays (French + Attitude = Frenchitude) give ideas for injecting a bit of frenchness into your life, whether you live in Buisson or Bora Bora.