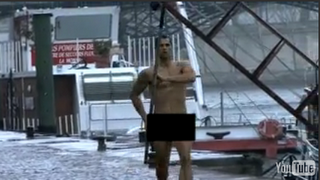 You guys are far too clever! Hardly anybody fell for my Pam Anderson April Fool’s joke (well, my little sister Jayne, but only for about five minutes and she has the excuse of being pregnant which as we all know does odd things to one’s brain chemistry).
Although I had a lot of fun concocting the “Pammy and Her Heels Come to Villers” post I have to say it is going to be hard to ever top my April Fool’s post from last year.
Life has thrown us a few little “jokes” of its own this week. Nothing major, just discovering the car needed a surprise overhaul, Clem has come down with some scourge that seems to include sleep deprivation for everybody concerned, and there was a leak in the wall of an elderly neighbour’s apartment in Beaune that we have spent the past two days helping her repair.
So no Frenchitude this week malheuresement. Must go and retrieve crying, sick baby from crib now.
However, so as not to leave you in the lurch, please enjoy this *ahem* riveting video clip of the nude pole vaulter running through Paris.
As my other sister says, shame about those little black rectangles. So what do you think? Do you think the video is for real or a montage?
Didn’t I tell you in a recent Frenchitude that the French prize craziness?