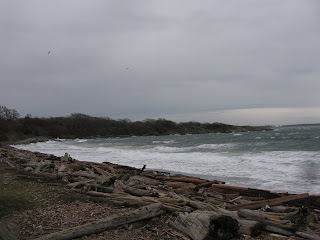 We’ve finally arrived in Canada after the trip from hell. Charlotte caught some kind of stomach bug and was running a mild fever and kept saying she felt like she needed to throw up (which led me to hoard the vomit bags from every flight we took), the security wouldn’t let me take any of her medicine on board – liquids, you know…I guess Al Quaeda has figured out how to make bombs out of children’s strawberry aspirin.

We got into Vancouver three hours late (traffic jam in Heathrow’s take off lanes, as usual), missed our flights to Victoria, and then had to wait TWO HOURS beside the luggage carrousel waiting for our absent luggage which was first stuck behind a jammed cargo door (turned out it was frozen shut) and then when the ground crew finally got the door open they realized that all the cargo bins in the aircraft’s hold were also frozen shut so had to cut them open like sardine cans with metal cutters to get the luggage out. The BA staff said they had never seen or heard of this happening before, but I HAD noticed flying over Greenland that the outside temperature reading was hovering around -76 degrees Celsius.

Anyhoo – by some Christmas miracle managed to catch the very last flight over to Victoria which left at midnight, and arrived in Victoria after 28 hours of solid travel and less than 1 hour of sleep to be told by my parents that they had been without electricity since noon that day due to a huge winter storm that had knocked out the power lines.

“This day just keeps getting better and better,” was my response.
This meant no hot shower, no lights, no warm food, and no heat…it was just about enough to send me over the edge.
However, things have been steadily on the upswing since electricity came back on yesterday at noon, so I can’t complain. There’s a great storm (again) right now with gorgeous huge waves and tremendous wind at about 150 km / hour. It’s very beautiful, and it’s amazing how having electricity and hot showers can make one have such a more benign view towards nature.