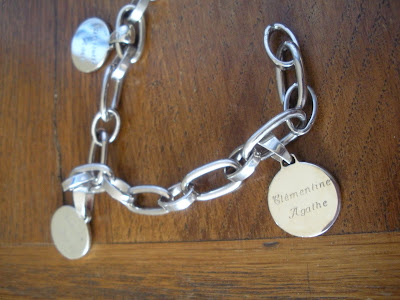 Franck picked the occasion of Clémentine’s arrival into this world to decide that he was going to become a Serious Athlete. In the months after Clem was born I would often find myself being regaled at the breakfast table with his plans to run a marathon one day.
“Haven’t you ever wanted to run a marathon?” he asked one fine morning when Clem was about seven months old.
Still wallowing in a noxious stew of postpartum hormones, I had been slumped over my bowl of requisite caffeine after a refreshing 3-hour night sleep due to a teething baby.

My hair was falling out by the fistful, my shoulders were in a permanent kink from holding Clem all day long, and when Franck asked the question I had been in the midst of contemplating whether my stomach would ever look normal again after my third pregnancy and C-section (a week later my Ob / Gyn answered this question with his trademark honesty – “ah, ma pauvre, certainly not without a lot of plastic surgery”).

“Are you frickin‘ kidding me?” I said to Franck. “In case you haven’t noticed, I am running a marathon – it’s called pregnancy, a C-section, and postpartum.”
Mothers are, in my opinion, the world’s unsung heros. Of course our children are awards in and of themselves and we love them and all that blah, blah, blah.

But on days like yesterday when I had to give Clem the baby Heimlich to dislodge a piece of cookie she was choking on (my heart rate is just about returning to normal now, merci), and spend the entire afternoon in the ER with Charlotte who had split her chin open on one of our metal bistro chairs, I can’t help but think I deserve a medal for this.

In my experience, however, the world at large just gives a big metaphysical shrug at the notion that mothers deserve praise and rewards.

Of course we love our children, but contrary to popular belief this doesn’t make mothering magically easier or less exhausting. It is, though, soooooooo convenient for society to make us believe that it does.

French mothers have solved what I term the “lack-of-mothering-accolades” issue in a characteristically stylish way.

It is traditional for French mothers to wear what it is known as a “gourmette” which is basically a nice bracelet that has a little engraved medaille (that’s right, a shiny MEDAL) for each child, noting their name and their birth date.

If a husband is serious about wanting to minimize the impact of the postpartum period on his love life, it is extremely wise to present an exquisite gourmette and the subsequent medailles to his wife as a gift – preferably before the epidural has worn off.

Nevertheless, for those of us who married men who don’t understand the soothing powers of jewellery (i.e. Franck) I have decreed that it is perfectly acceptable to award ourselves with medals. This is what I did a few weeks ago; as I get older I realize that the best person to rely on for praise and accolades is…myself.

So here is my gourmette with my three medailles. Je l’adore. 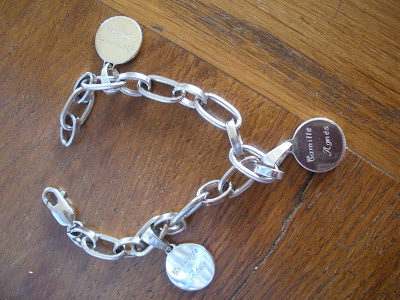 Traditionally gourmettes are gold, but since I; a) don’t have a 14 carat budget, b) haven’t worn gold since the 1980s, and c) have never shied away from bucking tradition, I had mine made up in silver. 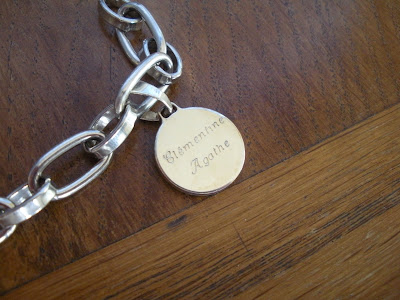 So next time I am urged by my husband to take part in a marathon or some such competitive Feat of Strength, I will glance down at my wrist, jangle my bracelet, and remember that I have already earned my medailles for this lifetime. If I want to run a marathon I guess I could, but it wouldn’t be because I need recognition for bravery, or tenacity, or endurance.

Along with my fellow mothers, on these counts I have nothing left to prove.