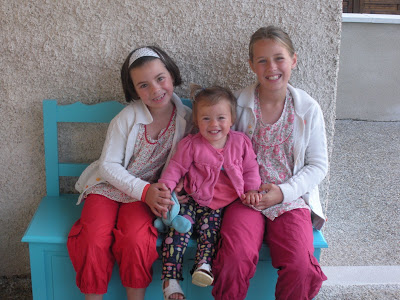 There are some times when parenting isn’t a matter of doing what is best, or what is right, but rather it becomes a simple matter of survival. As in, I just have to get through the next second with this screaming, flailing, biting, and pinching 17 month old on my lap, and maybe if I get through this second I’ll get through another second and then…BUT SEVEN HOURS WORTH OF SECONDS IS A LOT OF SECONDS!!!!

Just look at the photo above – doesn’t Clem look all sweetness and light as we say a final good-bye to La Maison des Chaumes? Ah hah. She had me hood-winked too.

Well, not exactly. She was all sweetness and light…as long as she wasn’t belted in to an airline seat.

Here we are almost 24 hours later in Vancouver. I think the reason I took this photo in the midst of my exhausted travel haze was to prove to myself that we had – despite many dicey moments during the trip – survived.

We’re still recovering, merci. Posts should hopefully resume some resemblance of a normal schedule by next week. 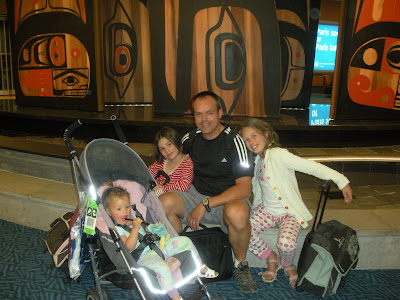