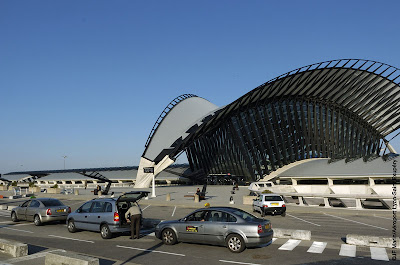 I will go to almost any lengths to avoid flying in or out of Charles de Gaulle airport in Paris, which commonly goes by the moniker Roissy.

Granted, there were two things I used to like about it. The first was watching how the French passengers all lit up cigarettes about 30 seconds after disembarking from the airplane in calm defiance of the non-stop “no smoking” announcements that accompanied the click and churn of the baggage carousel (when it was actually working, that is). Nothing to me signified Bienvenue en France quite like it.

The second thing were, of course, those glass tubes that ferried plane passengers through the airport like extras in an episode of “The Jetsons“, or “les Jetson” I suppose I should say.

However, the ultra strict (many French would say “oppressive, pseudo-American, and unlibertarian“) smoking fines have now finally all but eliminated the defiant smokers of Roissy, and the fact that parts of the terminals have begun to collapse has made riding the glass tubes a little more dangerous than I am comfortable with as a mother of three.

Otherwise, Roissy does not have much to recommend it.

It is filthy, constantly overcrowded, singularly lacking in amenities (notably toilets – especially clean, free ones). It also boasts one of the most depressing, impossible-to-use underground parking lots that I have ever witnessed. I sometimes wonder if among the many homeless people one sees wandering about down there, there is not a handful of travellers who have been lost in the disorienting rabbit warren parkades of Roissy for years, unable to find their voitures.

For several years now we book our flights in and out of Lyon’s Saint Éxupery airport, which believe me, is a VAST improvement.

Not only is Lyon’s airport named a very cool name – Saint Éxupery after the author of the iconic “Le Petit Prince” – but it is also very clean. Moreover, it has lovely toilets. This is always a big selling point for me – mother of two big girls with small bladders. They are going to kill me for writing that when they are older.

Saint Éxupery is all but located in the middle of the fields on the outskirts of Lyon, so driving to and from the airport is an easy and traffic free dream. There are also a lot of sunflower fields to admire en route, which is an edifying change from the graffiti around the péripherique in Paris.

I have never experienced any air traffic bottlenecks flying into Lyon. In Paris, it was the rule rather than the exception. I loath holding patterns; all that going up and down invariably makes my head feel like it’s going to explode, so this is a big selling point for me as well.

The only tip I would have is to make sure you have lots of 1 Euro coins or jétons in your pocket for the luggage carts (but unlike Roissy, you can at least find a luggage cart in Lyon’s airport). Although Lyon has a very progressive airport, we are still in France, after all.