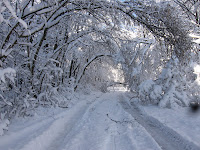 Chelsi just emailed me tonight to ask for the recipe for the quiche I served along with Claire’s wine to calm nerves and replenish souls the day after the “Winter Wonderland” ordeal (read below!). Seeing as her and her chef husband Graham run what I’ve heard is a fabulous restaurant in Brooklyn (and one that I have every intention of visiting sometime in the not-so-distant future), I figure that this recipe MUST be good enough to include in The Grape Journal.

So here is the Winter Wonderland (actually, to be completely honest here, Meme Germain’s) quiche recipe to scoop everyone out of those winter doldrums.

-1 flaked pastry crust, use any basic recipe except keep in mind that the French I know use only butter (no lard).

Roll out pastry and put in greased or parchment paper-ed pan. Spread mustard on bottom of crust. Throw pan with crust and mustard into oven at around 215 to 220 CELSIUS while you are mixing up the rest, but do keep an eye on it and take it out or lower the temp. if it’s browning too fast.

In medium sized bowl mix together three eggs, 300 ML of liquid creme fraiche (we use 15% Milk Fat, but 30% is even better! As one of our favorite and full-bodied french TV chefs always exclaims “Ca ne gache rien!”) and about 2/3 of the cheese, add a couple of turns of some freshly ground pepper. No salt as the mustard seasons it just perfectly (and, very unlike Meme, I’m actually imparting this secret willingly).

This liquid mix should come to about 1/2 litre in volume in total. If it doesn’t, just keep adding more creme fraiche and mixing until it does. I just mix it with a fork – no electrical appliances required.

Take the crust out of the oven, sprinkle filling (ham, tuna, or whatever) on mustard layer. Pour in mixed up egg and cream mixture, sprinkle remaining cheese on top.

Put back in oven for around 20-30 minutes until puffy and nicely browned. Leave sit for around ten minutes before serving – I also like it cold out of the fridge!

Bon Appetit and stay out of those blizzards if you can manage it!