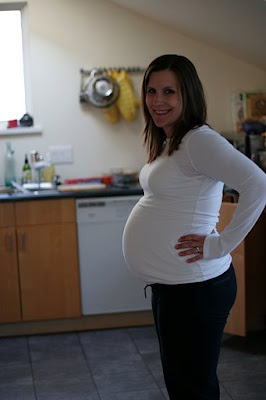 This topic is very timely for me, as my little sister Jayne (above) is gearing up to give birth to her niblet any day now. She is also sweltering away the final days of her third trimester in a top floor apartment in record breaking heat in Vancouver, for which I think she deserves a nice big hero cookie.

Anyway, back to the birth issue…

I personally think Jayne deserves to have one of those easy-pop-em-out-in-a-few-hours types of births. Karma OWES it to her, because until niblet arrives this is how the count stands: we have 5 children on my side of the family who came into the world via 5 C-sections.

However, Jayne’s last doctor’s appointment stirred up a suspicion that maybe the niblet has done a somersault and is now breech à la Charlotte, who was my first C-section for that very same reason.

While some birth experiences are undoubtedly nicer than others, I am a firm believer that any birth that results in a healthy baby and a healthy mother (even one who looks like she’s been run over by an 18 wheel truck, like I did every time) is a Successful Birth.

I have no problem with people wanting to have a certain type of birth experience and working in that direction, but I DO have a problem when this is taken to the extreme that it compromises the health of either the baby or the mom.

In Canada I am on the receiving end of a whole lot of pity when I say I’ve had three C-sections. One woman who had had regular births said to me (rather smugly, I may add),” I just feel so sorry for women who end up having to have a C-section. It’s just so sad.”

People often talk like I’ve suffered some sort of huge Greek tragedy in my life because I’d missed out on the only “right” way of giving birth. I often was made to feel like the women who had had relatively easy natural births had “succeeded’ whereas because I had been obliged to go the C-section route, I had failed.

But really, how can you succeed or fail at something over which you have so little control? In my opinion, while people who have been able to have a natural birth may have really worked in that direction, they have also been the happy beneficiaries of a significant amount of sheer dumb luck.

True, the three C-sections were no walk in the park, and it would have been nice to have two and three hour natural deliveries like my Mom (and which I hope Jayne might enjoy). But you know what? Mainly I just feel immensely grateful that my babies and I are alive, whereas if I had given birth 100 years ago or even in the present in a third world country, we would in all likelihood have already slipped the mortal coil.

That may sound rather stark, but after university Franck and I volunteered in rural Nepal for a few months helping to run surgical eye camps. The fear in the eyes of the pregnant women I saw in these camps chilled me to the core. I talked to one of the Nepali doctors about it, and he looked at me and said, “Laura, they are several days walk from the nearest medical help, and at least one out of four of them will not survive their birth. Of course they are scared.”

How lucky are we to live in a country where we have the luxury of worrying about what type of birth experience we want to have, instead of merely wishing to come out of it alive.

The French have a very pragmatic take on parenthood in general, and giving birth is no exception. No one method is seen as being infused with any more intrinsic value than any other.

It is a much less competitive society than North America, so there is none of these good, better, best judgements passed on things like giving birth.

If you need a C-section that’s no big deal, or if you decide you want an epidural the minute you walk into the hospital – just like breast vs bottle feeding – that is not only an entirely personal matter but completely your prerogative.

If you want to go for a natural birth and it all pans out, that’s great, but nobody will talk like you deserve a gold medal because of it. It is the end result – the baby – that matters. Everything else comes a very, very distant second.

So Jayne can wrap her Frenchitude about her and comfort herself in the coming days that no way of giving birth is right or wrong, and that she is free to make the choices that she needs to at the time without having any judgement passed on them.

There are a myriad of ways of bringing babies into the world, and they are all miraculous.