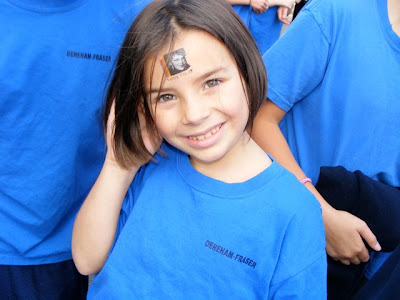 Camille at her first Terry Fox run (that’s a tattoo of Terry on her forehead). She is now a voracious supporter of the campaign to have Terry Fox’s Mom Betty light the Olympic Flame.

Charlotte and Camille are working so hard on improving their English and becoming not only little Frenchies, but real little Canucks too.

And I’m not helping them one bit.

For the first month of school Charlotte wrote “the” as “de” because that was simply how she heard the word in her head. Did I correct her?

I ask you -which is cuter, the top sentence or the bottom one?

I rest my case.

She also talks very seriously of a girl in her class who broke her leg and has to come to school on “crunches”.

One of Camille’s good friends at school has to take the bus every morning from a local municipality called “Saanich“. Camille says, “Can you believe it? It takes 30 minutes on the bus to come all the way from Sandwich.”

Do I correct her?

Instead, when she mentions this friend, I always pretend like I don’t know who she’s referring to just so I can hear her say, “You know Mom, the girl from Sandwich!”

One thought on “De Grill From Sandwich Was Walking On Crunches”