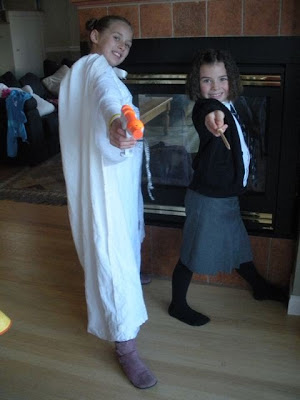 I knew that this year’s Halloween – as our first one back in North America after 5 years in France – would be pretty exciting for our family, but I hadn’t bargained on being taken by ambulance to the hospital.

It all started on Saturday afternoon as I was sitting on the couch in our living room threading a white ribbon around the collar of Charlotte’s Princess Lea costume in preparation for Trick or Treating. Completely out of the blue, my heart started pounding. This has happened to me a few times before, but it has always gone back to its normal rhythm within a few seconds.

Not this time. It was Halloween, after all.

After five minutes of walking around and still having my heart feel like it was beating out of my chest like Jim Carey when he spots Cameron Diaz in “The Mask” Franck and I decided to call for an ambulance.

I was sitting on the bench in the front hall when not one, but two ambulances arrived. The first thing I saw when the first one pulled up was the huge “ON STRIKE” sticker on the side.

But that wasn’t all…the paramedics rushed into the house with their defibrillators, stretcher, and oxygen tanks and looked quite surprised to find me relatively calm and collected sitting on the bench in the front hall, with my jacket and scarf on, all ready to go. The heart was still pounding though.

They walked me to the ambulance and although I was of course very, very scared I amazed myself by seeming very calm. They did a bunch of things all at once – ran a few ECGs, put in an IV, hooked me up to oxygen, and then when the paramedic asked how I was feeling and I answered, “Really scared actually. I have three children who need their mother,” he offered to put something to “take the edge off” in my IV.

I waffled for a moment, and then he said, “I’d take it if I were you.”

Twist my rubber arm. Yes. Hook me up please Scotty. But although the Valium certainly enhanced the ride to the hospital, it didn’t slow down my heart.

I was rushed into the Emergency ward where they ran a few more ECGs and the cardiologist tried twice to slow my heart down by pressing very hard on my carotid artery (which he informed me is not something one should try at home folks).

Didn’t work. My heart was still beating fast enough to actually shake the metal bed I was lying on.

The next step was to inject some kind of hard-core medicine into my IV to make my heart slow down. The nurses and the doctor warned me ahead of time that it would make me feel “truly awful” for a few seconds. The room filled with paramedics and nurses who apparently had never seen this particular medicine administered before.

On the count of 1-2-3 the cardiologist and two nurses injected it into my IV, to a riveted audience and one very scared person lying on the stretcher.

It did feel dreadful – kind of like a full-body lurch where you half pass out.

But as promised it was over very quickly and my heart reverted immediately back to its normal rhythm. They did another ECG which they all pronounced “beautiful” and then the cardiologist came to talk to Franck and I about what had just happened.

It was not a heart attack, nor a panic attack of any way, shape or form, he assured us. Rather, it was an electrical problem in the heart where the heart mistakes an echo for a beat and gets caught up in a loop beating in the wrong rhythm.

It is not dangerous, he said. It could and very likely will happen again, but now I knew what to do – come into the hospital and get it stopped. There are options if it becomes really problematic – long term medication or surgery – but for now he is going to run some further tests and then see how it plays out…

The main gist of the cardiologists speech was that I should NOT live in the fear of it happening again and should NOT do anything differently i.e. stop running, stop drinking coffee (crikey), traveling, etc. (though I didn’t drink coffee yesterday – which I realize is an anxiety driven attempt at exerting control over something over which I really have no control – and now have a MASSIVE caffeine-withdrawal headache as I write this).

This not living in fear thing though…it sounded completely logical at the time, but in reality it is easier said than done for me. I surprised myself at how calm I was throughout the whole thing, but yesterday felt drowned by the backlash of all that fear and emotion; I was exhausted and very spaced out.

Thankfully I am reading a great novel “At The King’s Command” by Susan Wiggs, who was a presenter at the Writer’s Conference I just attended in Surrey. Again, I was blown away at how comforting a good book can be when real life becomes too much.

Strangely, I also couldn’t wait to write about the incident. More for myself than for you, my cherished readers (merci for your indulgence). Not because it is particularly fun to relive it but because that is how I am wired – writing is how I get things OUT of my brain in order to obtain the distance I need to process them.

So I will remember our first Halloween back in Canada as being the scariest Halloween for me ever even though when I reflect back on the events I realize I have a lot to feel thankful for; top notch medical care, the fact that Franck was home with me when it happened, and the fact that my sister Suzanne swooped in and made sure my girls had a wonderful Halloween anyway.

So for the next little while I will be working very hard to “Keep Calm and Carry On” like the Brits during the Blitz in the face of my Halloween scare.