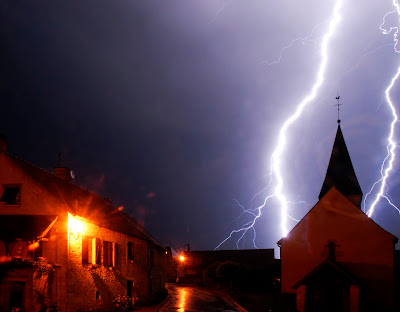 As I have had electrical issues on the brain during the past few days, I figured today’s Authentic France Travel Tip should be about power converters and plug adaptors.

Yes, I have a weird mind. Franck has informed me of this fact on several occasions.

Many guests ask the question “Do I need to bring power converters with me to France, and if so, what kind?”

Now being the accommodating vacation rental owner that I am at the beginning of every rental season I buy 2 -3 plug adaptors (not the same as power converters, plug adaptors allow you to plug a foreign electrical cord into French wall socket) for each of our properties.

These inevitably disappear over the course of the season though, not because our guests are thieving scoundrels, but because like me they are often caught up in a last-minute packing frenzy and forget that that plug adaptor at the end of their laptop cord doesn’t belong to them.

Never fear. These cheap little marvels can be picked up at any airport, hardware, or grocery store. It is always a good idea to have one or two with you when traveling in Europe.

Just for the record, a power converter is something quite different. It actually allows you to use foreign electrical equipment in France, even though the machine is made for, say, 115 volts whereas in France the voltage is 220 volts.

I have officially burnt out two hairdryers and one huge CD player with a power converter (the CD player episode was complete with smoke and flames), so I always warn guests to try power converters at their own risk.

Anyway, we keep French hairdryers, irons, and all that jazz at the properties so you hopefully don’t need a power converter at all, not even for your computer.

This is because all laptops made within the last 7 years (and if you are still limping along with a laptop that is more than 7 years old, you deserve a spot in the Smithsonian) have a power coverter integrated inside them, so it does all the work for you without you having to do a single thing – how clever.

So bring your plug adaptors and all your electrical things should work as they should. Isn’t it downright chouette when that happens!