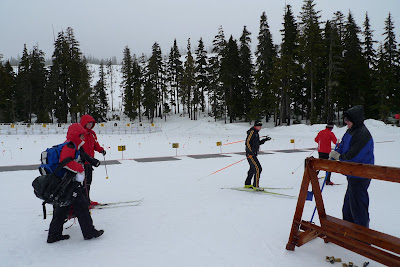 Believe it or not, I survived the ski trip.

The packing drove me half way mental, and Clem did her darnedest to finish the job by being a defiant, danger-seeking 2 year old demoiselle all weekend. She consequently spent a good chunk of her weekend in the “coin” – which I had decided would be the stairs, because there was no room to set up a chair facing a wall without everyone tripping over it – casting baleful looks in her mother’s direction.

Her general obstreperousness led to a rather gnarly and very public fight between Franck and I on the second night, but that is not the topic of today’s blog (maybe tomorrow).

Rather, today’s blog is about the grumpy French biathletes.

Before leaving to go up the mountain we had found out that the French Olympic cross country skiing and biathlon teams were training on Mt. Washington. Quelle cadeau!

So the second morning Franck and the rest of our gang headed down to the Nordic lodge while I looked after Clémentine, Treya, and Manon, doling out several mugs of hot chocolate and basically banishing Clem to the coin every half hour or so. I am thrilled to report that it seemed to have absolutely no dissuasive effect whatsoever.

Franck was initially delighted to see his fellow countrymen who were doing some very serious biathlon training. But when he tried to talk to them they were incredibly rustre (read: rude and gave him the brush-off).

At first Franck thought perhaps they were so rustre because they were preoccupied by the utter lack of snow over in Vancouver. However, he finally decided that non, it wasn’t that, it was of course explained by the fact that all of those biathlon guys were “les gars de la montagne” aka “mountain boys”.

Apparently the gars de la montagne are legendarily rustre (I should have known this, Franck implied), in stark contrast to les gars des vignes like Franck.

“They were messy too,” Franck said. “The German and Swiss teams had these helpers armed with buckets who cleaned up the bullet casings after the shooting part, bu the French just left them strewn all over the snow. It was embarrassing.”

I ask you – could my husband possibly be morphing into a Canuck? 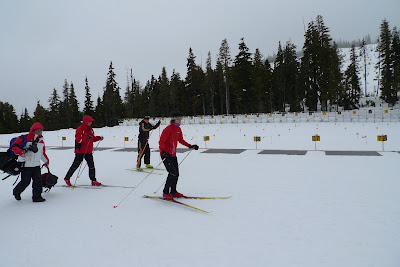