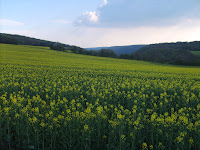 For men who become overwhelmed or distressed by the subject matter below, here is a photo I took a few days ago of a nice, calming canola field.

Yesterday, Franck and I had a delightful lunch at the Cafe de France on the Faubourg Bretonniere with our newest resident at Le Relais du Vieux Beaune, Ardythe from Nova Scotia who is striking out on her own and staying for 8 weeks.

Our spirited conversation, fueled by the house red and a tasty boeuf bourgignon, covered such diverse topics such as bear attacks, gay marriage, and a most interesting, albeit sensitive, subject that in my mind highlights almost better than anything else the cultural divide between France and Canada. As the three of us were chortling over it I exclaimed, “Oh my God, I have to write a blog about this!” so here it is;

Smoking / Non-Smoking habits used to strike me as one of the main ways to separate out the French from the North Americans. During the years after we first met, way back when Franck still rolled his own cigarettes with Drum tobacco, he was always the only smoker in a crowd of non-smokers in Canada, whereas in France I was always the only non-smoker in a crowd of smokers. It also always made me laugh (and cough) to witness how you could distinguish the French passengers on a trans-Atlantic flight freshly disgorged at Charles de Gaulle. They would, of course, be the ones who lit up within seconds in front of the “Fumer Interdit” signs.

However, times and mentalities have changed. Franck, his sister, and many of our friends have (thankfully) given up the habit.

Luckily, however, I have since stumbled on another subject that proves to me that the cultural divide between France and countries such as Canada is still alive and kicking.

That subject is the big “V”.
No, not “Victory”, the other “V”…Vasectomies.

Amongst our Canadian friends, the huge majority of the men we know who have had all the children they want have very pragmatically gone out and had what I have often been heard referred to as the “snip-snip”. Their wives, who have generally spent years dealing with such joys as labour, episiotomies, C-sections, and various birth control methods, are, rather understandably, quite amenable to this solution.

Mention the widespread practice of vasectomies to a table of French people, however, and you too will see that their reaction is nothing short of astounding to the Anglo-Saxon mind. It goes far beyond the almost instantaneous crossing of male legs that occurs worldwide when the subject is evoked. The French are stunned, horrified, and frankly initially disbelieving when enlightened about the existence of this parallel reality.

Statistically, the number of French men who have had vasectomies is so low that it is noted by the Marie Stopes Foundation as “nil or negligible”. One of the reasons for this may be that vasectomies are still illegal – yes, you read that right – in France under some obscure sub-section of the 19th Century Napoleonic Code which deems the act “self-mutilation”.

But the astonishment of the French in regards to the whole vasectomy issue goes far beyond the question of legality. After all, in my experience laws have never been something that the French feel they need to take too seriously. No, it is as though French men are almost incapable of believing that any man would willingly undergo the procedure short of being restrained with chains and shackles. They are simply aghast that anywhere in the world (and really, it is an accepted practice in many, many countries besides Canada and the US) men could accept what they can see only as, apart from castration, the worst possible affront to their identity as an homme.

A few of our male French friends (I will use no names to protect the cowardly) who had been, up until hearing about the high rate of vasectomies in Canada, eagerly planning a trip there suddenly cool on the idea. Another one has considered constructing a little cardboard sign to wear on a cord around his neck saying “Pas de vasectomie pour moi, s’il vous plait.”

I truly believe that the vasectomy practice seems so far-fetched to French men that they secretly begin to worry that – why not? – a brigade of scalpel wielding urologists huddle in wait at Canadian airports, just waiting to pounce on their latest prey and give them on-the-spot vasectomies before they are even allowed past our Immigration Booths.

And, most surprisingly, it is not just the men who are astounded at the preponderance of vasectomies in North America. French women are even more, if that is actually possible, horrified about the practice than the men. They would never, they swear, never allow anyone to do that to their husband. So it turns out that the whole “masculine identity” thing isn’t just some rather sad illusion that French men harbour about themselves. It really is a culturally wide phenomenon.

As for me, straddling both cultures, I can truly see both sides of the issue. For the record, I think both sides have their merits. Most of all, however, I am just happy to have stumbled on a subject that is guaranteed to enliven any dinner table conversation.