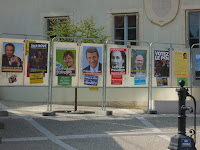 The campaign posters have already been put up in front of the Mayor’s office of Villers-la-Faye – where you will find me Sunday morning!

This Sunday, April 22nd, is election day in France. For the first time since receiving my French Passport and “Bienvenue a la Republique” letter from Jacques Chirac, I am voting as a French citizen. And this just isn’t any little municipal election. No, on Sunday we are electing the new “President” or “Presidente” of France.

However, like most elections, there is no one candidate that stands out in my mind as one I really feel good voting for. Rather, it is a case of picking the lesser of several evils, such as;

Arlette Laguiller – Rather ancient yet rabid communist and head of the “worker’s combat” party who wants to increase taxes and increase social spending. Won’t be voting for her, as am already paying more than enough taxes at the moment, thanks.

Jean-Marie Le Pen – Terrifying person whom I often wonder isn’t the reincarnation of Hitler? Anti-immigration, racist, resoundingly “family values” except that “family” in his definition does not include single parents or homosexuals, or anyone who doesn’t have white skin, basically…has, in the past, referred to the holocaust as a “small detail of history.” Sadly, he remains a formidable orator (and I have read that Hitler, Mussolini were too). The fact that he got to the second round in the last set of Presidential elections is a huge motivation for me to hustle my rear end down to the Mairie on Sunday morning. I will do everything in my power (i.e. voting for someone, anyone else) so that it doesn’t happen again.

Segolene Royale – This is who Charlotte is pushing for me to vote for as she learned in school that if Mme. Royale is elected (and she is in second or third position in the poles at the moment) she will be the first woman president of the Republique. I was of the same mind for a while, but her traditionally Socialist platform of more civil servants, more taxes, more social charges, and more pandering to the unions will, I believe, sound the death knell of the French economy. When we got a letter from the bank this morning saying that the government had deducted 11 centimes from each girls account as social charges on the interest they earn on the 45 measly Euros theyhave saved up in their kiddies account, I knew I could never vote for a Socialist in France. Unless, of course, she was up against Jean-Marie Le Pen (see above).

Nicolas Sarkozy – Little man who I have often wondered could be reincarnation of Napoleon? Economically to the right, which is actually centrist in a socialist country such as France. Seems to be the only one who could potentially reform stronghold of unions and lower taxes, a la Margaret Thatcher. In any case, he’s the only one proposing a thorough, wholesale reform of the french economy. However, he remains a rather unpalatable person – small, screwed up face, hyperactive manner, and is unable to hide his huge ego and ambition…he was humanized a bit when his wife ran off last summer to have an affair with a New York Sports’ Journalist (she has since returned, but is now lingering resolutely in the shadows), but there are still a lot of questions in my head as to how humane he will be as a president. He is leading in the the poles right now.

Francois Bayrou – Very uncharismatic man who claims to be a centrist although nobody really seems to know what he stands for besides an alternative to the front runners Segelone Royale (left) and Nicolas Sarkozy (right). He has the mystical quality of coming across as a nice, cool guy you would like to have as your uncle, even though every time he opens his mouth to answer a question you end up ten times more confused then before you asked it. This, however, has never been an obstacle to politicians being elected in France in the past.

There are lots of other candidates – the baby faced extreme left candidate Olivier Besancenot who is still working as a mailman while he runs for president, the grey haired Phillippe de Villiers who is the rejected pet of Jean-Marie Le Pen and has now gone out and formed his own party…the ecologist Jose Bove with his famous handle-bar moustache, list goes on…

The polls say that over 40% of the french (like me) haven’t made their final decision re: who they are going to vote for on Sunday. And, as we saw last time around, the French electorate can serve up some very nasty surprises (aka Le Pen). I’ll keep you posted, and if anyone needs me Sunday morning, you know where to find me!