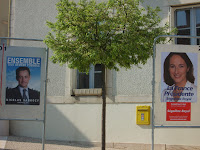 So now it’s just between Segolene “La Belle” as my girls see her, and the twitchy yet strangely engaging Nicolas Sarkozy. Charlotte keeps pleading Segolene’s case, especially as between the two rounds of voting her team has managed to find an even more beautiful photo of her and put up a fresh batch of posters. I, however, am not convinced. More taxes, more social charges, more power to the unions that already have a strangle-hold on the country…

Francois Bayrou (the cool, centrist uncle) got 18% of the vote in the first round, so in the end it will be his electors that will decide this election. He, however, has refused to endorse either of the remaining two candidates, and is milking his heady moment in power for all it’s worth.

Jean-Marie Le Pen, I am happy to report, got a measly 11% or something like that. Still too many but a huge improvement on the last election when he could have potentially been elected president in the 2nd round. You should have seen his expression when the results came in – like he was passing a kidney stone!

Rendez-vous the 6th of May to find out who is the new President or Presidente of France.