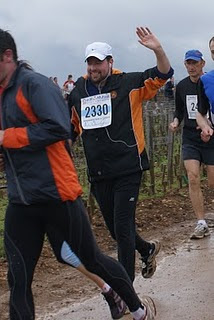 Lisa recently allowed John to do a “guest post” on her fabulous blog “Village Vignettes” which is recounting the tales of her family’s sojourn at La Maison des Chaumes in Villers-la-Faye.

He had just completed the fabled Nuits-Saint-Georges 10k race past some of the world’s most valued vineyards and through chateaux that Franck and I did last year. AND he has his bottle of wine to prove it. Bravo John!

Franck and I both wish someone would hurry up and invent that cool transporter thingy like they have on the Starship Enterprise so that we could have atomized over to Burgundy to do it with him (and enjoy a big celebratory dinner afterwards). But until we are able to do that, we have signed up for Victoria’s Times-Colonist 10k on April 24th.

Granted, I don’t have the wine to motivate me this year (or the little pâté on baguette thingies they were handing out in Vosne Romanée last year) but I DO have a two year old who I found sucking on a razor this morning.

All that adrenaline has to go somewhere.