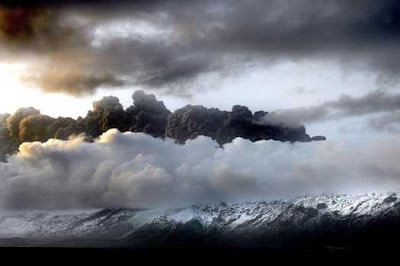 In case you haven’t been watching or reading the news, yes that last word in my post title is truly a REAL WORD. In Icelandic, anyway.

It is the name of the spewing volcano that is causing unprecedented flight cancellations, travel stoppages, and accommodation cancellations.

Yes, that last one strikes directly into the heart of Grape Rentals.

Our guests – an independent-minded, feisty bunch as a rule – almost unanimously decided that their best response to Bin Laden was not to drop their dreams and plans.

The current situation is entirely different; travellers have no choice. Eyjafjallajoekull’s eruption is a quintessential First Testament “Act of God”. You almost expect to see Moses lurking around in the ash in search of his Staff.

As the airline losses ratchet up by the hour, fingers of blame are being pointed at various European government officials but the reality is that no-one, besides God, is to blame for this one. And good luck trying to get monetary compensation from Him.

There are industry officials who say that the ash really isn’t that dangerous and that the airlines should giving flying through it a shot. I don’t know about you, but being a aeronautical Guinea Pig does not appeal to me in the slightest. So…where does that leave everybody?

I’m still mulling over who should pay for this Act of God.

The EC definitely won’t be compensating Grape Rentals and the hundreds of thousands of little European operators like ourselves for bookings that our guests couldn’t follow through on because their flights were grounded. I can’t in all good conscience charge my guests for a booking that they cannot, through no fault of their own, use…let me know if you have any brilliant insights.

In the meantime I’m keeping close tabs of the indigestion of Eyjafjallajoekull, and am keeping my fingers crossed for Lisa K. who is staying at La Maison des Chaumes and is hoping her Mom will be able to make it over on a much anticipated visit to Burgundy.

My toes will also be crossed for Sue Short and her husband Roger who had a fabulous trip to Burgundy planned with a stay at La Maison des Deux Clochers and a chapter of the Chevaliers du Tastevin at Clos Vourgeot.

One tidbit of information that I was able to glean for those people travelling on Air Canada is that once flights get up and running they will be honouring actual reservations first and THEN dealing with he passengers who are stranded. So say flights get up again Tuesday morning and you have a reservation for Tuesday night – theoretically you will be able to fly.

At least I’ve found a silver lining to this huge plume of troublesome volcanic ash; the SNCF strike in France didn’t have nearly the impact that the SNCF union leaders (who don’t give a fig for inconveniencing their passengers) hoped for. Bien fait pour eux…