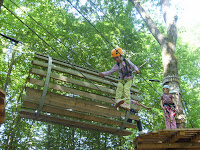 The first time that Franck took me to a “forest” (for nefarious purposes, if memory serves correct) here in Burgundy I almost collapsed from laughing so hard.

For a girl like me, born and brought up surrounded by the old growth rain forest of the Pacific Northwest, the saplings planted in neat, straight lines could by no stretch of the imagination be termed a “forest”.

“This isn’t a forest!” I snorted as I waved my hand around the fluff of greenery that coiffed the top of the vineyard-encircled hill we were standing on. “You can get lost in a forest – you can’t get lost here.”

“You can,” Franck protested.

“No, you can’t. Besides there are no bears or cougars…or anything that will attack you if it’s in the mood.”

“There are wild boars.”

That just didn’t cut it as far as I was concerned. Indeed all the bears and wolves of France were driven out by the same forces that were responsible for cutting down and replanting “forests” all over France, namely the Celts, then Romans, then other groups and tribes that came to populate the countryside over the centuries.

Since my first introduction to french forests those many years ago I have actually come to appreciate the many positive things about them (and don’t laugh at them anymore…well, almost never anyway), such as;

– If you get lost and keep walking you are pretty much sure you will eventually stumble upon a village. In BC there are many forests in which, if you got lost, your chances of dying of thirst / starvation / becoming a Bear’s breakfast before you can find your way out are alarmingly high.

– It is actually nice to be able to go for a nice walk without having to bring along whistles, bells, pepper spray, or a very loud and obnoxious singing voice to scare off the wild animals. Likewise you don’t have to worry that the quick, abrupt movements of your small children are attracting the local cougar population. As my brother-in-law Greg commented while he was here “it’s so lovely and benign.”

– In Canada your chances of stumbling upon the ruins of a Gallo-Roman village or an ancient monolith put there by the druids on your walk is very slim indeed, whereas here it is very high. Just ask us about the Gallo-Roman ruins near Arcenant, or any of the other ones studding the forests around here.

Anyway, needing a dose of “forest” and a bit of adventure this Sunday we took the girls to an rapidly-growing activity here known as “Acrobranch.” 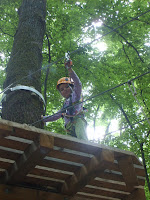 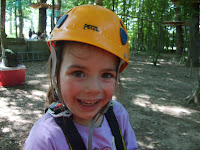 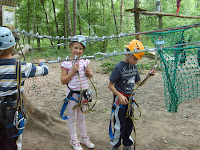 This happened in a spot on the edge of the “forest” that is just beside the lovely little village of Givry (about a half hour drive South from our place). Charlotte & Camille got all rigged up to go on these vertigo-inducing rope, wire, and net routes high up int the tree tops.

They were both very keen, but were significantly less so for a while until they got used to the heights, especially their first time around. Once they got the hang of it they were very proud of themselves, and were like a couple of monkies up there.

Camille of course was so chuffed with her small self that she began yelling instructions to all the other little kids before / after her like some kind of army commander. You know, there is a “right” way to do things…don’t these kids get it!? Sheesh…

Charlotte did a harder course which required her to clip herself in and out of different cords , and was at times REALLY HIGH. But she pushed through and did stuff that I’m not even sure I would have the guts to do. She has a deep well of hidden courage inside her, that one. 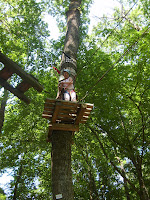 Franck and I still have cricks in our necks from looking at our daughters up in the treetops and shouting encouragements, but all in all I have to say it was a great day in the forest. See, I didn’t use quotation marks around the word this time!

To our many guests with children, we would highly recommend this activity – the girls begged us to stay longer after they had been doing it for almost three hours, and fell asleep in a matter of seconds that night.