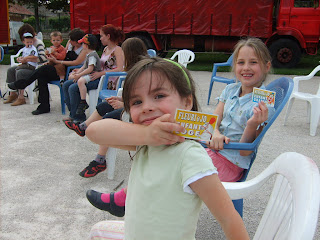 The other day as I was driving the girls to school they caught sight of a poster of a neon, deranged-looking clown at the bottom of our street. The circus was coming to Villers-la-Faye, just down the street from our house beside the Salle des Fetes. Of course we had to go.

We knew a bit about what to expect as the circus had come to town last year too. It had consisted of an Italian gypsy family with two pre-adolescent girls who did cartwheels dressed up in worn velour leotards that captured Camille and Charlotte’s imagination and meant that for months afterwards their favorite imaginary game was “circus girls”. There was also a dog who could do tricks and a lazy or dead albino boa constrictor that w 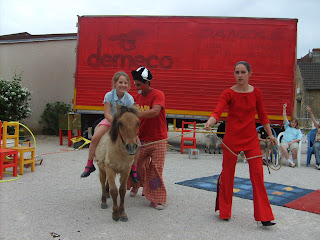 e could all go up and pet at the end. It was, no doubt, a hard act to beat.

Much to the girls’ disappointment this year there were no “circus girls” in the show. Instead for the 5 Euros entrance fee per person we were treated to the tricks of Fleuri and Jo, a young Spanish couple who also seemed to have some gypsy blood in them. They also had a trick dog, as well as a very recalcitrant pony who did a huge poo right in front of us, much to the children’s hilarity and joy, in protest for being forced to parade around the ring.

Jo did amazing feats of strength by doing handstands on balanced chairs (he only fell once) and because he found that his unicycle wheel was deflated he and Fleuri gave all the children pony rides. At the end the children didn’t want to leave so they spent some time patting the wonder dog and tormenting the goat, who wasn’t in the show and whose purpose will forever remain a mystery, picketed nearby. Then everyone who was still hanging around helped Fleuri and Jo stack up their plastic chairs and put them back in their truck. 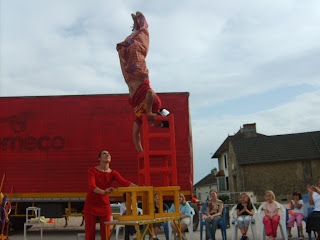 I find I actually prefer this kind of home-grown circus to the Barnum & Bailey’s type. You never know what you are going to get – a pony poo, a boa constrict 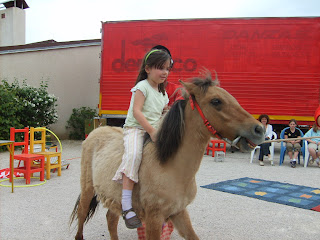 or, or stylish velour leotards.